Last week, we discussed the IPCC's depressing (but not surprising) report about the need to take action now to curb climate change. In the coming weeks, we'll focus on some possible solutions. A study published last year warned that all the scenarios for keeping global temperature rise to 2C require “negative emissions” — wrangling CO2 from the atmosphere one way or another and burying it on land, underground, or in the oceans. 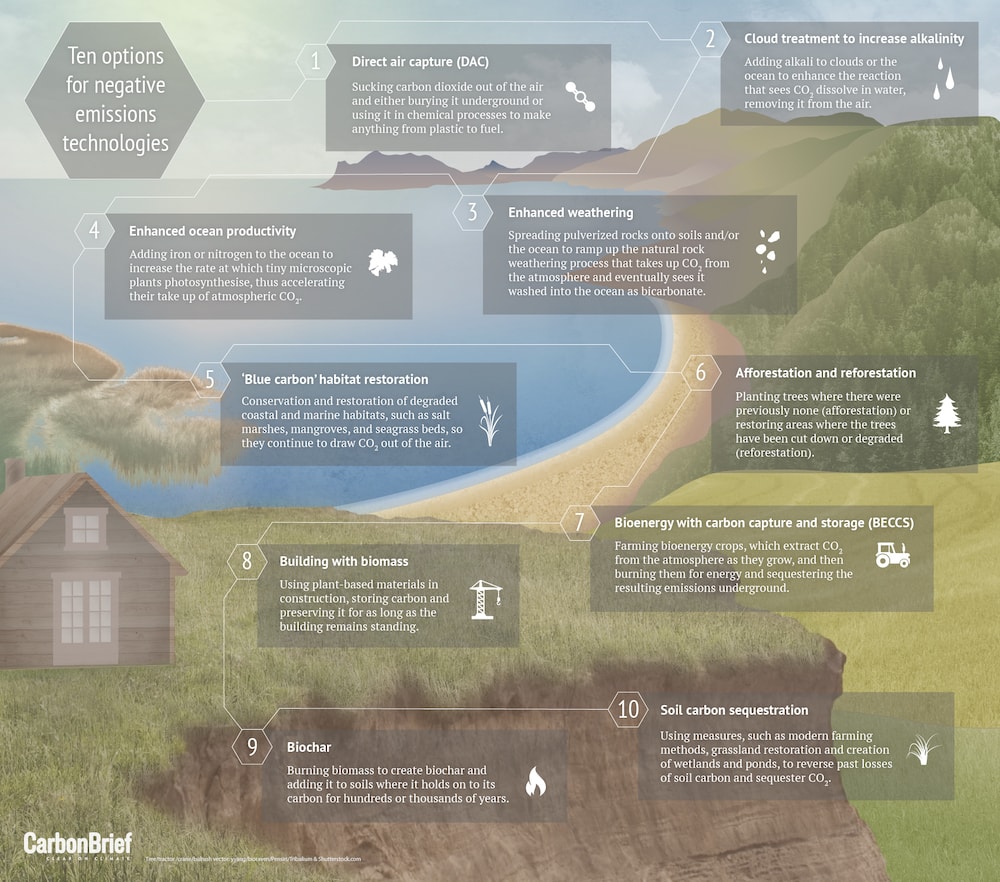 One of the most promising technologies for reducing emissions is called Direct Air Capture (DAC). DAC devices are often described as "artificial trees" that suck carbon out of the air — the carbon can then be stored underground or used to make fuel. Some estimates suggest that this method could sequester all the CO2 emitted at our current rate, although it still needs to overcome some major practical and financial obstacles (the tech is still pretty pricey — think $600 per ton of carbon).

So How Realistic Is This?

It's getting there. Companies are beginning to come up with inventive ways to make DAC profitable and more widespread. Global Thermostat thinks they can bring the price down to $50 per ton by taking CO2 out of the atmosphere and selling it to soda companies to use both as "green bubbles" and as a raw material to make plastic bottles. 400 Global Thermostat plants could remove the equivalent of 60 million cars' worth of CO2 from the atmosphere.

The company Carbon Engineering plans to use captured CO2 as raw material for producing synthetic fuel, which could replace diesel, gasoline, and jet fuel. Synthetic fuels require electricity, hydrogen, and CO2 — by getting electricity from renewable sources, using CO2 from the air, and obtaining hydrogen from solar-powered electrolysis, it's possible to produce a very "low-carbon" fuel. The company calls the process "air to fuels" (A2F), and hopes to go commercial in 2021.

Michael Che, talking about the IPCC report on Saturday Night Live last week, said he thinks people continue to react to climate change with a shrug because "they keep telling us we’re gonna lose everything, and nobody cares about everything, people only care about some things. Hey, Fox News readers, what if we told you all the flags and Confederate statues would be gone? White women, your yarn is gonna disappear forever! That means no socks for your shiba inus!"

And it's true. Climate change still feels abstract and far away, despite the warnings. But it won't feel that way forever.

Obviously the simplest solution for curbing climate change is to stop emissions in the first place and alter how our society interacts with the world on a fundamental level, but how likely is that? Although none of these "negative emissions" solutions are mature enough to use yet and some aren't proven to work at scale, if politicians continue failing to act, and people refuse to change their habits, technology like DAC becoming profitable may be our last hope.

Take To The Streets

We need to demand action from our local, state and federal leaders and from ourselves to prevent "ecological and social disaster." Here are some steps to demand that action:

Bill Gates breaks down what he is doing to help.

An urban farming renaissance is blooming in Paris. Strawberries are grown in shipping containers and kale is harvested on department store rooftops. The mayor of Paris, Anne Hidalgo, is leasing public land at a discount to agricultural ventures, hoping to turn 30ha of the city into urban farms by 2020. Urban agriculture is sprouting up in many cities — from Detroit to London to New York, but could be most useful in poor agricultural areas like Dubai. Urban farming reduces food miles, makes cities cleaner and more attractive, absorbs carbon dioxide, and recycles water and food waste. Researchers estimate that city farms can produce 10% of the world's vegetables, roots, and legumes, in addition to reducing floods and lowering energy use (soil on rooftops provides insulation). Urban agriculture can't completely replace the current food system, but it can play a significant part.

Beer supply is threatened by heat and drought.

Renewable energy is favored by both Democrats and Republicans.