Coming Out of Their Shell

Coming Out of Their Shells

All that excess carbon has to go somewhere, and Earth's oceans currently soak up a third of human generated CO2 emissions each year. When CO2 is absorbed by seawater, it dissolves to form carbonic acid — as a result of absorbing all this excess carbon, the planet's oceans are now 30% more acidic than pre-industrial revolution levels. At our current rate, global oceans could be 150 percent more acidic by the end of the century than they have been for 20 million years.

This rise in ocean acidification has the potential to massively disrupt marine ecosystems — organisms like coral, mussels, sea urchins, and oysters can't form the shells they need to survive in an acidic environment (since there's less calcium carbonate). A die-off of these creatures could very easily lead to cascading effects, as small shell-building organisms power the rest of the marine food chain, and coral reefs house a quarter of the ocean's biodiversity.

If that doesn't strike a chord a with you, picture a world with no oysters... Oyster hatcheries in the Pacific Northwest have been experiencing massive die-offs of oyster larvae in recent years. Due to water circulation patterns, coastal waters in Oregon and Washington have been even more acidic than elsewhere, and oysters can't survive in an environment starved for aragonite (the form of calcium carbonate they need to build their shells).

Are There Solutions in Sight?

One solution is adding massive quantities of lime — produced by burning limestone (a process used in cement production) — to the ocean, which would increase its CO2 absorption capacity while also decreasing its acidity. Other solutions involve "fertilizing" the ocean with iron or the mineral olivine to boost phytoplankton growth (which would drive the rest of the food chain). However, these solutions require large scale geo-engineering efforts that could have unforeseen consequences and very dangerous ecological side effects.

Lower risk, more local solutions, such as cultivating seagrasses, kelps, and shell beds, are are a better bet currently and a project we can tackle immediately. These seagrasses (which guzzle CO2 far more efficiently than land plants) could counteract high levels of acidity in local hotspots and serve as a protective mechanism for coral reefs and other shell-dependent organisms.

Just a century ago, 100,000 tigers roamed Asia. Now only 4,000 are left in the wild — habitat destruction, poaching, and retaliatory killings are causing a rapid decline in the species worldwide. Tigers have gone completely extinct in Cambodia and Vietnam and only a few individuals are left in the wild in Laos and China. In fact, farmed tigers (those in zoos, wildlife farms and parks, and breeding centers) outnumber tigers in the wild. New genetic research published this week classifies tigers into 6 unique subspecies (subspecies live in separate habitats, look different, and are genetically unique): the Bengal, Amur, South China, Sumatran, Indochinese, and Malayan tiger. They share a common ancestor from 110,000 years ago.

Researchers have long debated the number of different subspecies of tigers, which the genomic research from this week's study seems to resolve. Recognizing the genetic differences within species is crucial in conserving the population. Dr. Shu-Jin Luo, leader of the study, says that “if you think that all tigers are genetically homogeneous, you might say if you lose the Amur tiger, you still have the Bengal tiger — and that’s O.K. because they’re very similar. But that’s not O.K., because now we know that tigers are not all alike.”

A single oil spill has leaked millions of barrels of oil into the Gulf of Mexico over the past 14 years. During Hurricane Ivan, in 2004, a Taylor Energy oil production platform sank 12 miles off the coast of Louisiana. Since then, many of the wells have not been capped, causing between 300 and 700 barrels of oil leak into the gulf everyday. The spill is on record to take over BP's Deepwater Horizon as the largest spill in history, and federal officials estimate that the spill could continue leaking oil throughout the rest of the century. There is no fix in sight. There is so much oil in the water that researchers need respirators to study the damage in the gulf. By law, companies are required to report oil pollution to the government, but there is no law that requires the government or companies to alert the public... 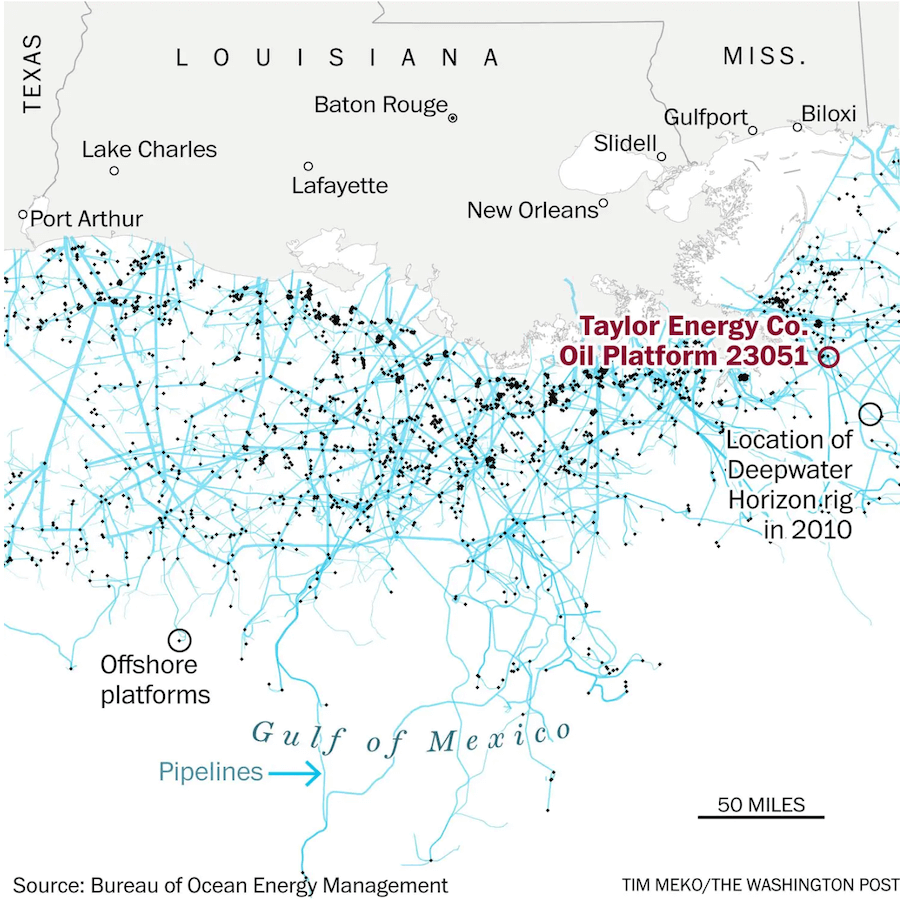 As spills like this continue in the gulf with no resolution in sight, Trump is attempting to expand oil and gas drilling to nearly all US continental shelf waters. This includes the Atlantic coast (which sees twice as many hurricanes as the gulf already), where drilling hasn't occurred in 50 years. More than 10 years after both spills, the government still does not know the full impact the spills have had on marine life, and no economic analysis has been done.

These 5 crops are threatened by climate change.

The banana is going extinct.

The rise of the robot farmer.

How to shift public attitudes and win the global climate battle.

Ban this entire class of pesticides to protect children's health.

Urban trees can store as much carbon as tropical rain forests.