China poured more concrete between 2011 and 2013 than the US had during the entire twentieth century. Concrete is the base upon which modern civilization is built, and an industry that, if it were a country, would be the 3rd largest carbon emitter in the world (behind the US and China), making up 8% of the global total. Concrete is a big offender mainly due to its use of cement as the glue that holds everything together.

The process that creates cement spews a ton of CO2 — limestone is heated to produce lime (also called clinker, and mixed with clay to make cement), which emits CO2 as a byproduct of the reaction. To make concrete, you mix water and an aggregate like gravel with the cement. When water mixes with the cement, it reacts with CO2 in the air and ends up sequestering some carbon. The product hardens before the reaction can finish, however, and doesn't come close to equaling the overall emissions of the process.

So there are a couple ways you can knock down the emissions that happen in producing cement — allow the above reaction to finish, or substitute a different raw material for limestone. Companies are experimenting with both of these options. Some are working on "carbon-cured" cements, which absorb CO2 produced from other industrial processes as they harden (instead of water). One company is using bacteria to grow cement bricks. 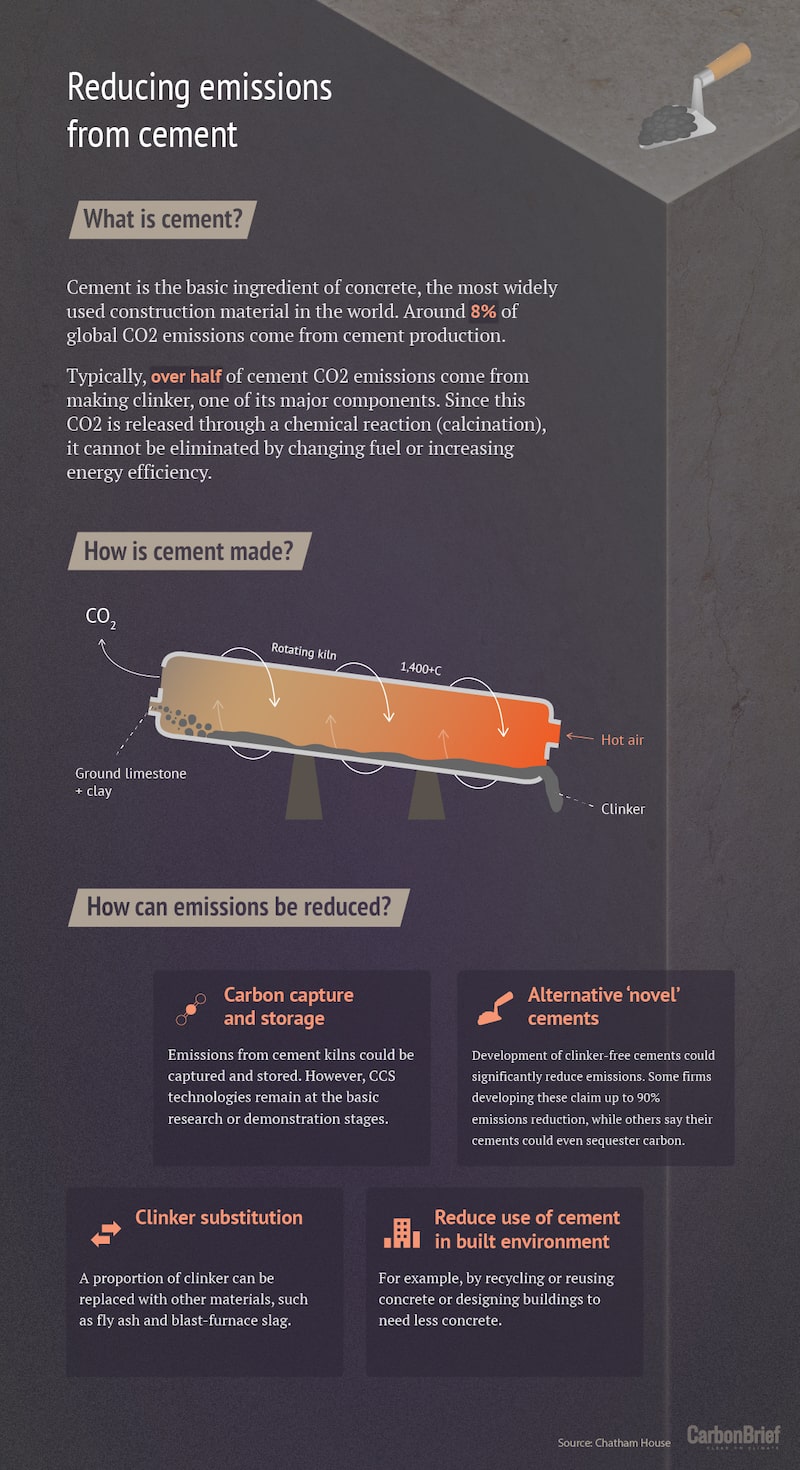 As everyone likely knows at this point, to keep the planet livable we are going to need to employ a range of negative emissions technologies. As countries like India continue to industrialize, cement production is set to increase 25% from today (over four times 1990 levels). There's a $1 trillion market for negative carbon emissions technologies, and cement represents a huge chunk of that.

It would be a major game-changer if a company could come up with a scalable solution that converts the cement production process from a major emitter to a carbon sink. It's absolutely possible, and the World Cement Association (WCA) seems to be on board. They're currently developing a “Climate Change Action Plan”, set to be published later this month.

Midterm elections are tomorrow. Your vote matters, especially for the environment. Here are some cool things on the ballot this year that could actually have an impact on climate change:

Washington: The first state to have a carbon tax on their ballot. Governor Inslee has already tried twice to pass a bill that would tax carbon dioxide emissions, but supporters are hopeful that the third time is a charm. This year's version has specific plans to put revenue towards programs that will reduce global warming, like wind and solar energy development. If Washington passes a carbon tax, it will show that carbon taxes are politically viable in the US.

New Mexico: Has a huge methane leak problem. Leaks from oil and gas plants have created the largest methane cloud in the nation (the size of Delaware), which hovers over the state. Citizens will choose between two candidates for public lands commissioner, who will oversee how public land is leased (currently mostly to oil and gas companies) and how revenue is generated. Stephanie Garcia Richard (D), who has vowed to crack down on methane leaks, is running against Patrick Lyons (R), who is backed by the oil industry.

Arizona and Nevada: Are striving to get 50% of electricity from solar and wind by 2030. Seems like an easy win in states with such high amounts of sunshine, but Nevada's governor vetoed a similar bill last year and Arizona's utility companies have campaigned hard against the bill. 29 states and DC already have Renewable Portfolio Standards (although some are not as ambitious as this bill). Experts say that the more states that push for renewable energy the cheaper it will become nation wide.

Colorado: Fracking has been booming in CO and citizens worry that its poisoning their water. The proposed rule would cut back on how much fracking would be allowed but wouldn't outright ban it like other states have done (Maryland, Vermont, New York). Oil and gas companies fear that if this passes, similar proposals will pop up in other states.

People are fighting Trump's deregulation on the state level. While federal policy will be needed to fight climate change, state and local efforts can help direct national policy. At least six candidates running for governor are emphasizing clean energy as part of their platform. Climate change should be a bipartisan issue and people are worried about it all over the country.

Yale's 2018 Climate Opinion Map shows what people are worried about across the country.

Kids get to continue to sue the government for climate change.

Eat craft chocolate to save cacao.

Why is this iceberg a perfect rectangle?

World hunger has risen three years in a row.