A recent WWF report found that humans have destroyed over 60% of all mammals, reptiles, amphibians, birds, and fish since 1970. A UN-backed study suggests that this dramatic loss of biodiversity represents the earth's 6th mass extinction and a risk equal to climate change (although these are two sides of the same coin). The biggest cause of wildlife depletion is the conversion of species' natural habitats to farmland, as well as overfishing, widespread chemical pollution, and land degradation.

Concrete example. The tropical savannah in South and Central America (where vertebrate populations have declined 89%) has undergone massive deforestation as a direct result of expanding soy agriculture, which is exported internationally as pig and chicken feed to power the industrial agricultural machine. We can't afford to carry on unsustainable models of production forever — ultimately we need a global paradigm shift away from unceasing growth and overconsumption, or we face a dismal future. 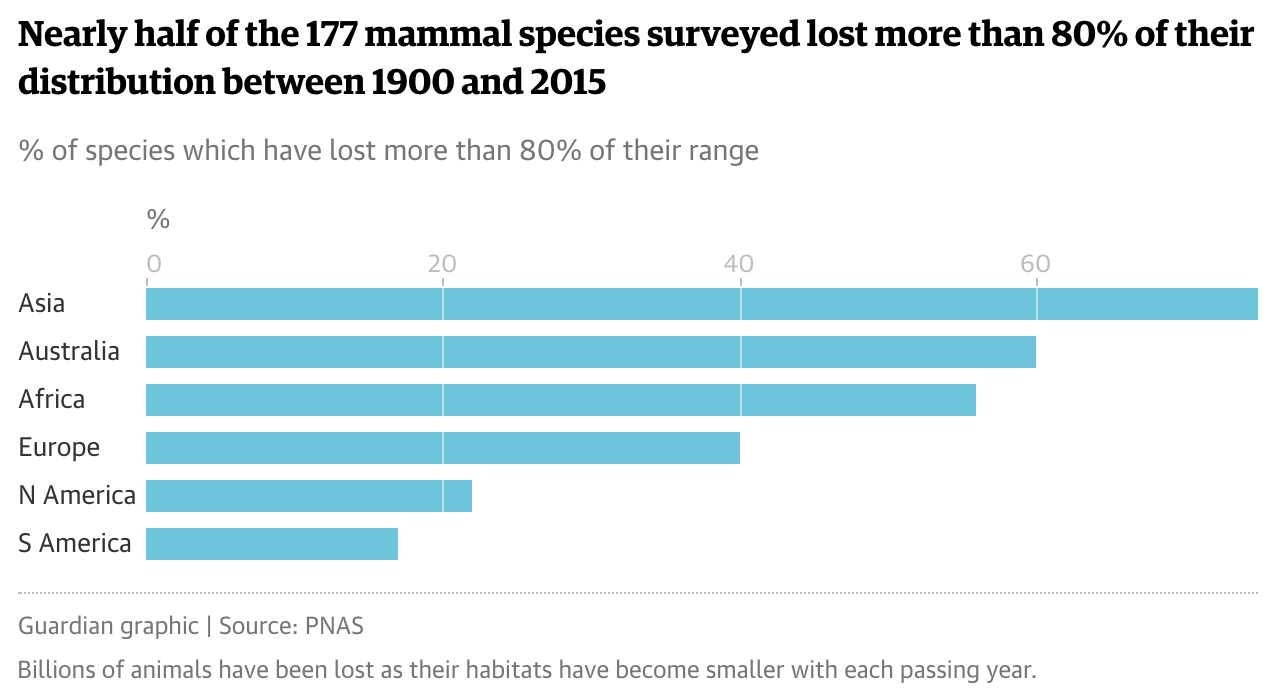 On the bright side, we may be entering a renaissance in conservation biology due to advances in artificial intelligence. Historically wildlife research has been relatively low tech, underfunded, and small scale — so it's tough to cull meaningful insights from population analyses.

Wild Me is a nonprofit that aims to change how wildlife research is done by combining computer vision, citizen science, and machine learning. One of their recent projects is a bot that sifts through YouTube for whale shark videos (often posted by tourists and divers on vacation) and can identify individual sharks based on their pattern of spots — it then catalogues the information in a database.

“Letting this thing loose on YouTube, especially with migratory species that are out in the ocean, you get this chance of finding outlier sightings of animals where researchers just simply aren’t going,” says Wild Me's Jon Van Oast. “It goes places where the researchers just can’t for logistics reasons and funding.”

The potential applications for AI in wildlife conservation are enormous — from the automation of monitoring endangered species by camera trap (remote motion activated cameras) to extracting meaningful information on animal populations from photos Instagrammed by people on vacation. This technology is only in its infancy but a lot of cool projects are already underway — check out Giraffe Spotter, FlukeBook, and MantaMatcher.

2018 was already a record California wildfire season without help from the Camp Fire (Paradise, CA, which now holds the record for the deadliest and most destructive fire in CA history) and the Woosley Fire (Malibu, CA). Together, they have burned more than 200,000 acres and left 66 people dead. Hundreds more are still missing.

Why Does This Keep Happening?

Trump blamed the fires on poor forest management, but experts were quick to argue that windy, dry weather after a record hot and dry summer are the real cause. Remember, fires are natural in California and essential to the health of ecosystems, many of which evolved to burn. However, there has been an upward trend in the size and destruction of fires since the 1980's (15 of the 20 largest fires have happened since 2000). Southern California has warmed 3°F over the past century, and most of California's driest and hottest summers have occurred in the last 20 years. David Swain, a climate scientist at UCLA, says: "We've been lengthening fire season by shortening the precipitation season, and we're warming throughout”.

How Do We Fix It?

One interesting study proposes reintroducing large animals, particularly big plant eaters, to fire-prone areas. These animals eat the woody debris that serves as prime fire fuel — and their non-uniform grazing patterns break up areas that burn easily, slowing the spread of fire. There is still plenty of research to be done in this area, but some modern studies already demonstrate how grazing has reduced fire frequencies in Kansas prairies, Kenyan savannah, and Australian tropical forests.

US cities ranked by climate risk and readiness.