We've all heard about Trump's border wall, but the environmental degradation that building such a wall will cause is getting little coverage. First off, since this wall would be built for national security reasons, it is exempt from any federal environmental laws (i.e. the Endangered Species Act or the Clean Water Act), meaning no environmental impact analysis will be conducted to make sure that the wall does not cause environmental harm.

What Does That Mean Exactly?

More than 40% of the land along the Mexico-US border is part of a wildlife refuge or national park. The area is extremely diverse and includes 6 eco-regions (desert scrubs, forests and woodlands, salt marshes, etc.). The proposed wall sites would slice through many conservation areas, such as the Lower Rio Grande Valley National Wildlife Refuge and Big Bend National Park. According to a report in Bioscience, the border wall will encroach on the habitats of more than 1000 species of animals and 400 species of plants, many of which are listed as endangered or vulnerable. Not only would the wall degrade natural vegetation and cause habitat loss, but a physical barrier also disrupts migration patterns and makes it harder for animals to reach food, water, and mates. The Peninsular bighorn sheep, Mexican gray wolf, jaguar, and ocelot are just a few species named in the study at risk of extinction and reduced genetic diversity due to the proposed barrier. A wall also exacerbates flooding disasters by acting as a dam during flash floods (this happened in 2008 in Arizona along one 5-mile stretch of the current fenced border). 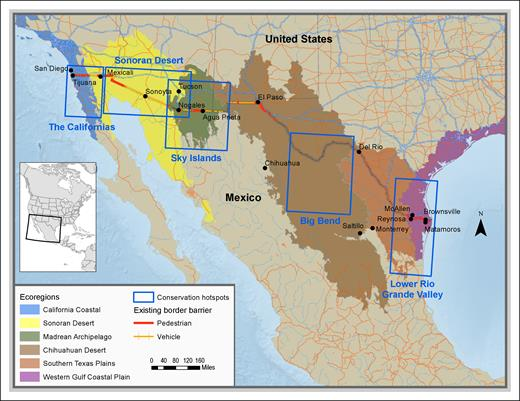 Many environmental groups are planning to take legal action. The National Butterfly Center in Mission, Texas filed a restraining order this week to keep federal agents and construction workers off its property — the wall would cut through its 100-acre butterfly sanctuary (putting 70% of the sanctuary on the Mexico side). Last March the House passed a bill banning construction throughout the Santa Ana National Wildlife Refuge, after objections from environmental groups. Hopefully, with more opposition, we can stop construction plans through more critical wildlife habitats. You can find your representative here. Call them and make your voice heard.

The past couple weeks have seen quite a few developments for the Green New Deal. After a lot of talk and speculation (see our initial breakdown here), Alexandria Ocasio-Cortez released a resolution co-authored by Massachusetts senator Ed Markey (and co-sponsored by 68 Democrats in the House and 9 in the Senate). Rather than specific policy proposals, the document is a hugely ambitious and broad list of goals to shoot for over the next ten years, from retrofitting buildings for energy efficiency, to investing in sustainable agriculture and family farms, to guaranteeing healthcare and jobs for all Americans.

Senate Majority Leader Mitch McConnell announced that he is planning a vote on the resolution in order to force Democrats to plant a flag on the issue, which many see as a ploy to splinter the party. The resolution has largely been brushed off as a socialist fantasy by conservatives — at the same time more Democratic Presidential hopefuls are throwing their weight behind the GND.

Give Me a (Short) Critical Analysis...

Acheiving the goals laid out in the resolution is probably impossible. But that really isn't the point — the point is to make it clear that our current approach (which mainly consists of occasional banter about cap and trade carbon pricing) won't cut it in the face of today's climate crisis. Without even examining the specific contents of the resolution, you could argue that it's already doing its job — by virtue of existing, it has cemented climate action as a critical part of the Democratic campaign for 2020, which up to this point was pretty much ignored by most serious candidates.

The resolution itself doesn't confine its scope to environmental policy — partway through it veers into a broad array of progressive policy suggestions, from breaking up monopolies to increasing the power of unions. The danger here is that it seems to treat all of America's issues as equally important, rather than viewing the climate crisis as a unique emergency that requires all hands on deck immediately. Some argue that in this era you can't separate environmental policy from economic policy — that emissions go hand in hand with infrastructure (our car-centric city designs, for example). But at this stage, when specifics have not been defined, it risks alienating people who might otherwise give their support.

However, Ocasio-Cortez specifically described the document as a "request for proposals" — a starting point for others to suggest specific policy. Hopefully the resolution leads to those proposals, sparks more conversation, and in 2020 leads to a government that decides to concern itself with preventing environmental catastrophe.

The Senate passed a bipartisan land conservation bill this week protecting more than a million acres of land and permanently reinstating the Land and Water Conservation Fund to pay for conservation programs. It goes to the House next, where it also has bipartisan support. The bill classifies 1.3 million acres in Utah, California, New Mexico and Oregon as "wilderness" — the most rigorous protection land can have (it even prohibits roads and motorized vehicles). It also proposes several new national monuments and expands national parks. This is the biggest public lands package in the last decade and Senate members are all patting themselves on the back for their ability to get along. While permanent funding for conservation programs is great, the Land and Water Conservation Fund gets its revenue from fees charged to oil and gas companies drilling in federal waters. It may be the best we have for now, but why allow the exploitation of some natural resources to conserve others?

How Phoenix is working to beat urban heat.

This map shows you what your city will feel like in 2080.

Canada's answer to Tesla is a $15,500 electric three-wheeler.