You know Teflon — it's in non-stick pans, microwave popcorn bags, makeup, waterproof clothes (heard of Gore-Tex?), dental floss, firefighting foam, and a million other products. Teflon is part of a family of related chemicals called perfluoroalkyl substances (PFAS), which are incredibly stable and will easily outlast humans on this planet. They end up in the water supply by way of factory runoff or can enter lakes and freshwater sources when firefighting foam is used. The accumulation of PFAS (specifically a chemical known as C8) in the bloodstream can cause various cancers and birth defects, a fact which was suspected by DuPont (the manufacturer of Teflon) for decades but never disclosed to regulators. 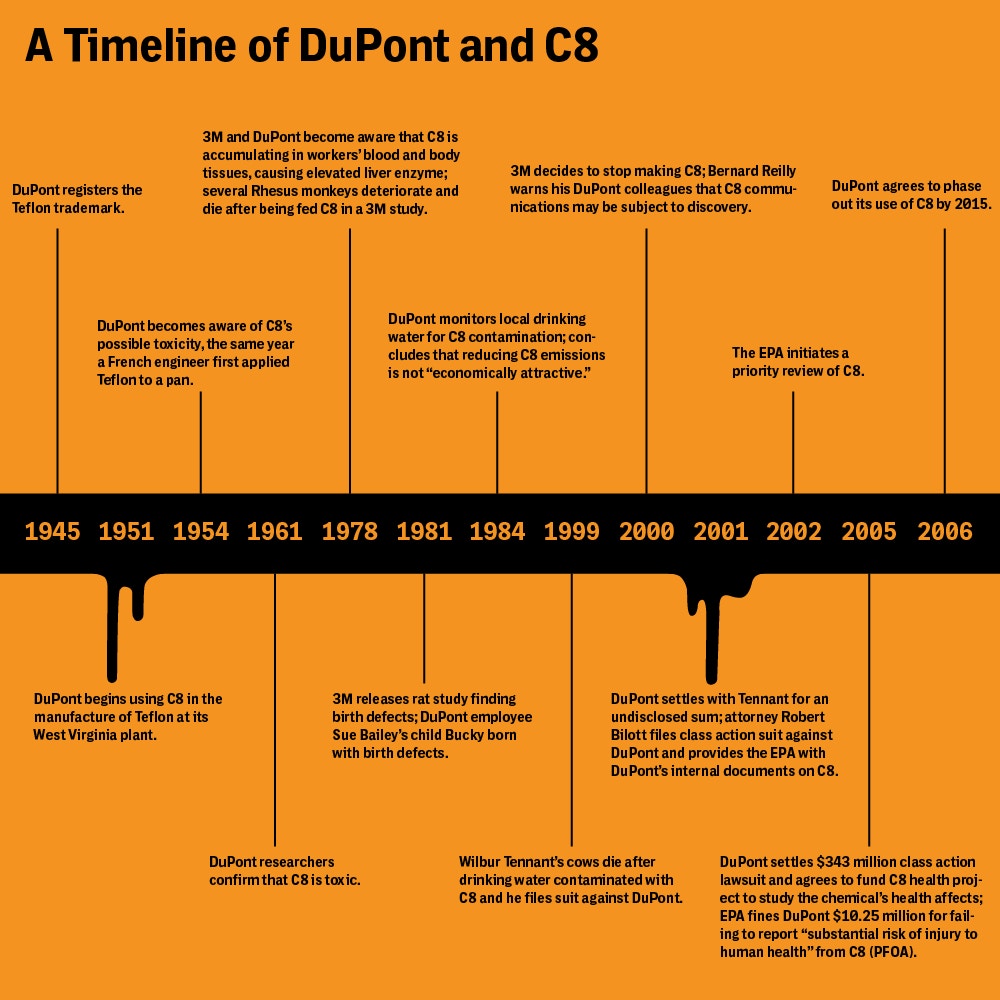 The EPA has known about health problems caused by PFAS since early studies performed by 3M (another maker of PFAS) in 1979, but their investigation and regulatory measures have been lazy and deceptive. Earlier this year they attempted to suppress a report about the chemicals, with an internal aid stating that public knowledge would be a "public relations disaster". A recent report linked PFAS exposure to liver toxicity, immune disruption, and developmental problems and argued that the safe level in drinking water should be at least 10 times lower than the EPA recommends. Numerous states have sued the manufacturers of PFAS for damages to public health and the environment — illegally dumping chemicals into creeks and rivers and contamination of drinking water from chemical plant runoff. Despite these cases and billions of dollars of damages settled in lawsuits, PFAS production remains unregulated.

99% of Americans have PFAS in their bloodstream and the drinking water sources of 110 million people are contaminated with PFAS. This map shows the prevalence of PFAS pollution in the US.

The Environmental Working Group has a great tap water database. You can also demand that your elected officials prevent PFAS producing companies from producing in your state.

There's a lot more to the story. If you have some time and a high tolerance for nonsense and lying corporations, check out The Intercept's 17-part series on The Teflon Toxin.

Maine leads the nation in Lyme disease cases and has seen a twenty fold increase over the last two decades, likely as a result of the warming climate (ticks go dormant in colder temperatures). The deer tick is a carrier of Lyme and other diseases and relies on other animals, like mice and deer, for transport. Parts of the country where Lyme disease has never occurred are starting to see cases pop up — vector-borne (vectors = organisms transmitting pathogens or parasites) diseases in general have tripled due to the warming climate, 77% of which are tick-related. Slight shifts in temperatures can change the distribution patterns of ticks (and other vectors like mosquitos), which are extremely climate-sensitive. The EPA named Lyme disease as a documented impact of global warming in 2014, but little government funded research has gone into studying it and other public health effects. In Maine, where the governor is a climate science denier, the state CDC does little more than encourage residents to "use personal protective measures to prevent tick exposures." 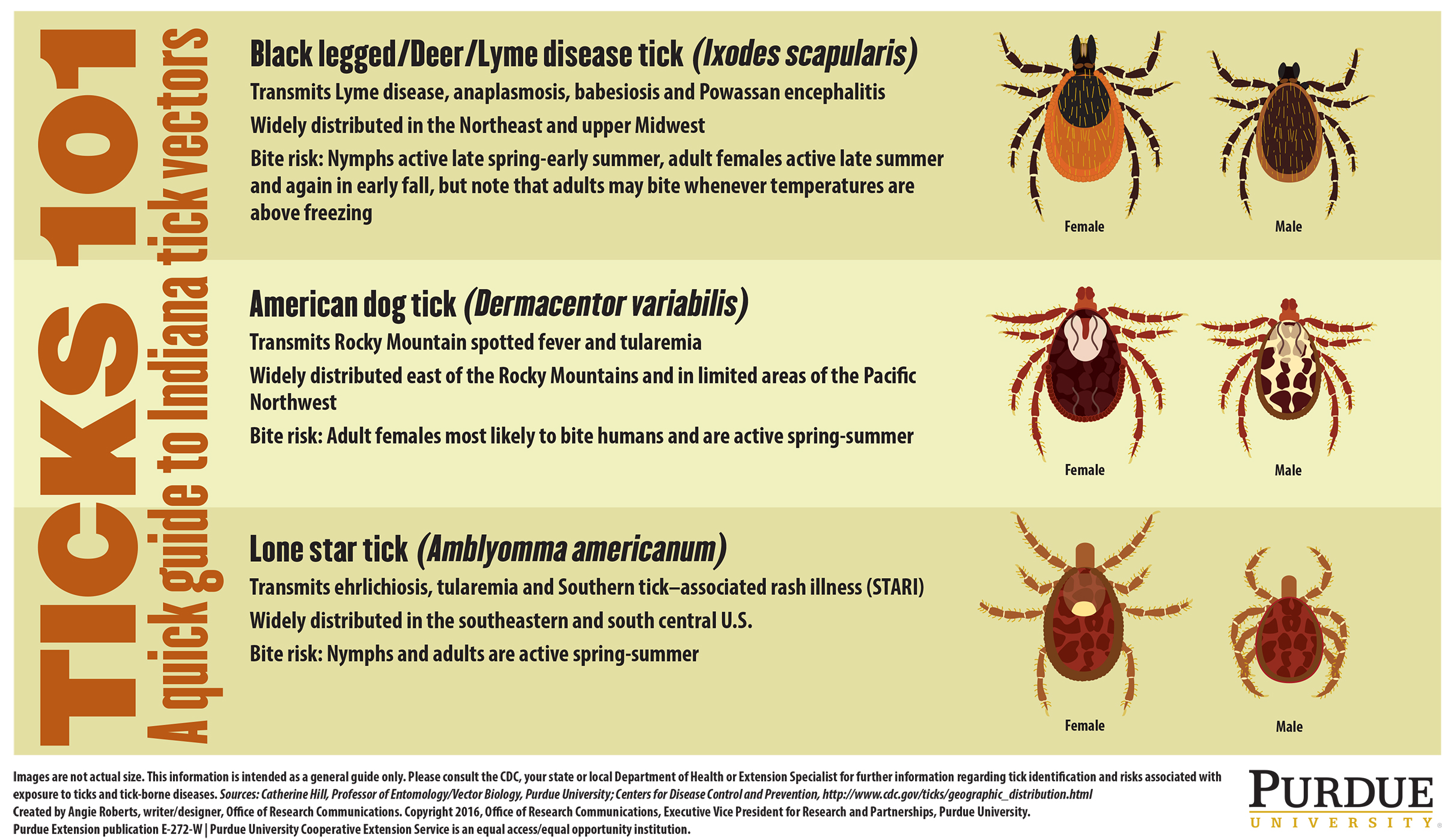 Lyme and other tick-related diseases are pretty gnarly, capable of causing long term joint issues, short-term memory loss, and neurological problems. Large portions of the Eastern US are already dealing with a Lyme disease epidemic, and given the state of climate change, it will only get worse.

Absurd creature of the day: the Lone Star tick. Traveling in packs like swarms of "thirsty, galloping lentils", they are virtually indestructible and render their victims extremely allergic to red meat. Per the name, the Lone Star usually resides in Texas and Florida but has traveled north in recent years — tick ecologists have logged samples in Maine since 2013 and actually regard it as a better indicator of climate change than the deer tick.

A recent study comparing multiple agricultural landscapes and wild habitats across three countries found that the best way to stop the loss of sequestered carbon (when carbon dioxide from the atmosphere is captured and stored through natural process like in soil, trees, etc) is to greatly limit the expansion of agriculture. The researchers found that even on farms where specific carbon-storing practices have been put in place, carbon stocks were much lower than natural habitats across all locations. What does this all mean? Wild, natural ecosystems are the best at capturing carbon from the atmosphere and the best environmental strategy may be to intensify agricultural production on existing land and stop the spread of more farmland. Although this strategy might be impractical in reality, it does stress the importance of leaving natural habitats untouched and the importance of adopting innovative space-saving agricultural techniques, like vertical food production, to spare more natural habitat. Currently, there are real trade-offs and researchers cannot figure out a way to give our "planet to nature at a scale that maintains ecosystem connectivity and still feeds the world without at least some nations or subpopulations losing out." Researchers do suggest that eliminating food waste (24% of all calories), and shifting consumption from land intensive livestock to more efficient plant-rich diets would allow a significant amount of land conservation with little cost to people.

The DNC reverses the ban on donations from fossil fuel companies.

Are you getting duped when you buy organic meat?

This Toronto skycraper is covered with 450 trees.