No Fracking While Vaping

There are four new Democrats in the House who are calling for a Green New Deal, a huge push to pivot the government away from fossil fuels and build renewable energy infrastructure. California approved a proposition that guarantees more space for farm animals (one square foot of floor space per laying hen by 2022), and rejected a proposal to repeal a 2017 gas tax. And Michigan’s new Attorney General Dana Nessel has promised to relaunch the state’s investigation into the Flint water crisis.

The Good and Weird

Florida passed an Amendment that banned both offshore oil and natural gas drilling and indoor vaping. Two things that are obviously connected...

The Not So Good

Washington's carbon tax was defeated, while Colorado's proposition to ban oil and gas drilling on 85 percent of the state's land failed. The fossil fuel industry pumped $73 million into fighting these initiatives, and it paid off. Arizona's proposition to increase it's renewable energy target to 50 percent by 2030 also fell short, and Alaska's proposal to add new restrictions on projects that threaten the habitat of salmon went down as well.

The United Nations released a report this week stating that the ozone layer is healing. In the late 1970s, scientists realized that the ozone layer had been thinning due to the rampant use of aerosol sprays and coolants, which contain CFCs (chlorofluorocarbons — they release bromine and chlorine, which eat away at the ozone). The ozone layer is important in protecting the Earth from ultraviolet rays (think: skin cancer, crop damage, etc). So in 1987, countries around the world signed the Montreal Protocol, where they agreed to phase out CFCs. And it's working — this year scientists recorded a 16% decrease in the size of the hole over the South Pole from its peak in 2006. Experts predict that the ozone layer over the Northern Hemisphere will be completely repaired in the 2030s, while other sections will be repaired by mid century. 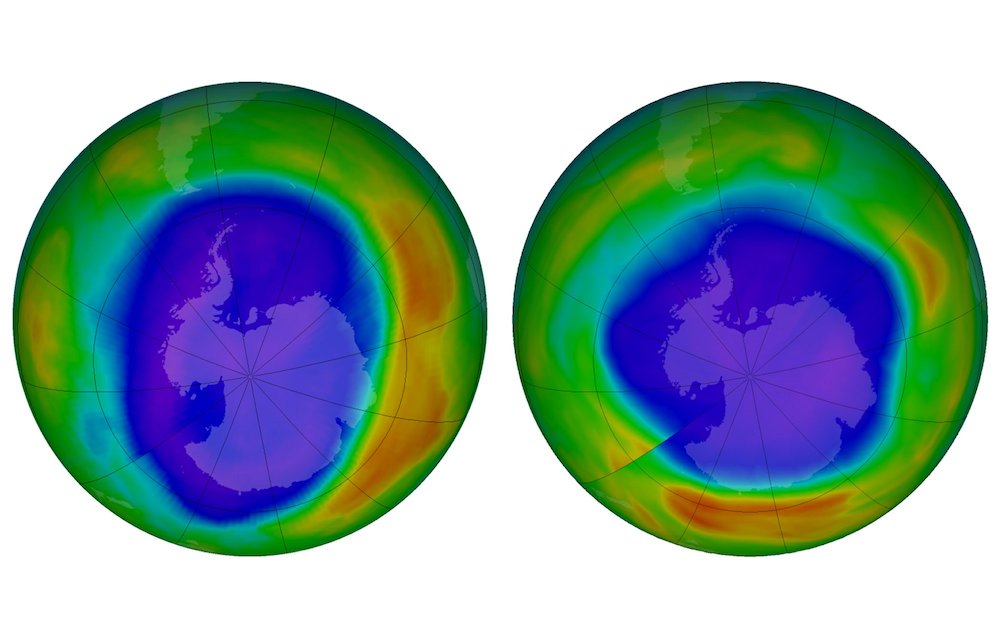 If ozone depleting chemicals weren't phased out, the world would have lost two thirds of the ozone layer by 2065. It shows that climate policy does make a difference, that the Earth can repair itself over time, and that sweeping multilateral agreements are possible.

The Work to Come

A unique feature of the Montreal Protocol is a provision that enables the Parties to the Protocol to respond quickly to new scientific information. The Kigali Amendment, signed in 2016, is the latest manifestation of this provision. The amendment (which goes into effect in 2019) cuts production and consumption of hydrofluorocarbons (HFCs), which were a replacement for CFCs. The goal is an 80% reduction in HFC consumption by 2047, which could help avoid up to 0.5°C increase in global temperature by the end of the century.

Other Things in the Pipeline

A federal judge blocked the Keystone XL Pipeline permit this week, stating that environmental concerns were ignored by the Trump administration. To recap, the Keystone XL pipeline was proposed almost a decade ago by TransCanada, which intended to build an oil pipeline from Canada to Texas. Obama blocked it in 2015 due to environmental and indigenous rights concerns (citing that it would only create 50 permanent jobs while contributing significantly to CO2 emissions). Trump reversed that ruling during his first couple weeks in office (claiming it would create 48,000 jobs).

The federal court ruling argues that the current administration failed to take into account low oil prices, the risk of oil spills, and greenhouse gas emissions when pushing the project forward and that they "discarded prior factual findings related to climate change to support its course reversal." According to the federal court, the Trump administration also needs to update the risk to endangered species and will need to take another look at the cultural resource impacts along the pipeline route. Stay tuned, because the State Department may appeal and take it to the 9th Circuit.

Why Should You Care?

The is a significant win, as the federal court is saying that threats to clean water, climate and communities can't be simply ignored. Many indigenous groups who live along the pipeline route are against this project. Critics also question the economic viability of the project due to falling oil prices.

Palau is the first nation to ban reef toxic sunscreens.