Nope, it's not the latest Netflix Original to make waves (haven't heard of anyone doing the "Green New Deal Challenge" yet), but the term is hot right now. And chances are you'll be hearing more and more about it as Democrats hop on the bandwagon when they announce their candidacy for the 2020 Presidential Election (see Cory Booker, Bernie Sanders, Elizabeth Warren). But when someone says "Green New Deal", what are they actually talking about? 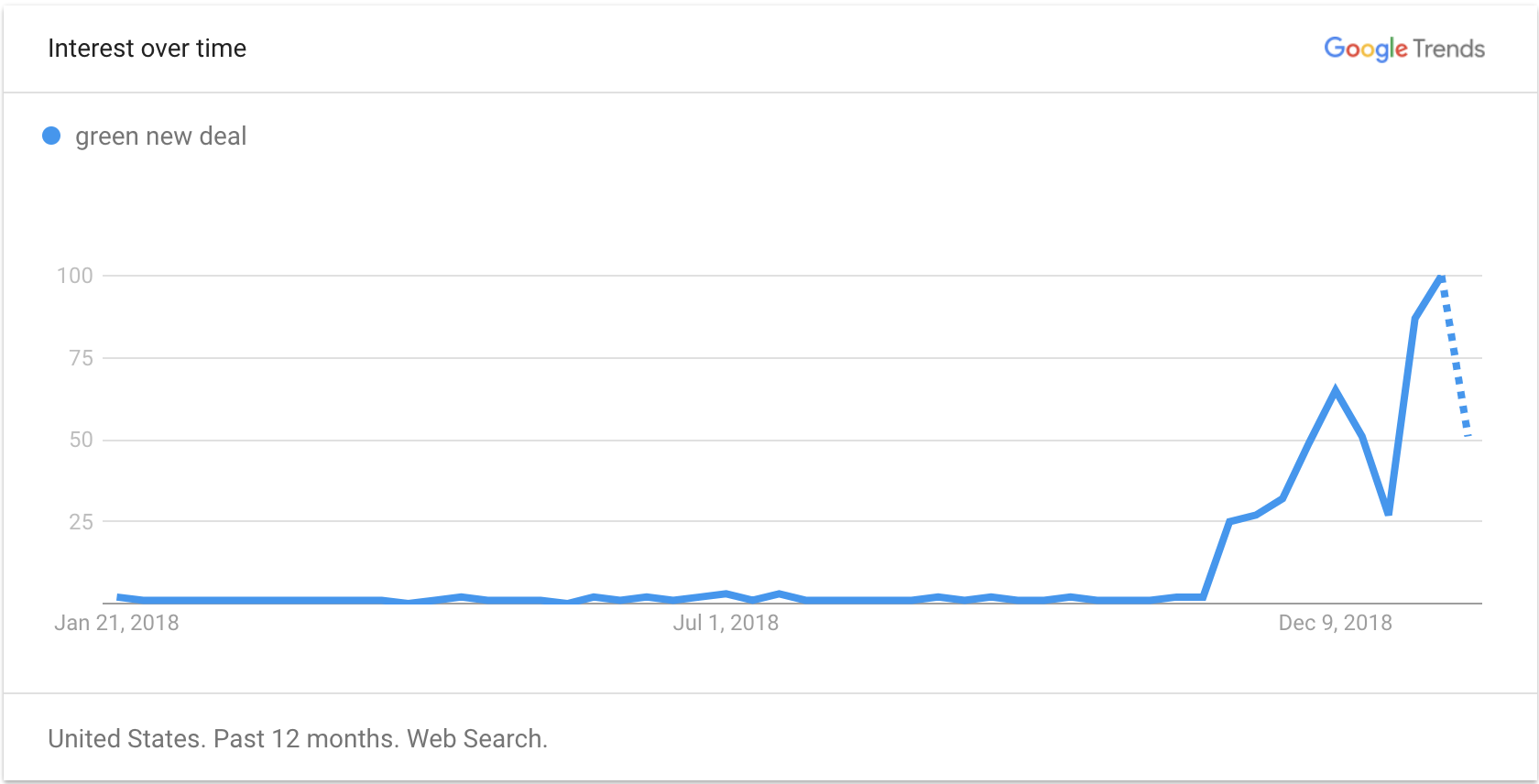 The term was coined separately on both sides of the pond around 2007. Thomas Friedeman, a New York Times columnist who calls himself a "free-market guy" and a staunch activist for globalism, coined the term in the US. In the UK, the economist Richard Murphy founded the Green New Deal Group. The general idea — of decarbonizing the economy, ending fossil fuel subsidies (for reference, the US hands out $20 billion to oil, gas, and coal companies every year), and incentivizing renewables — seemed poised to take hold in both governments. But then the conservative parties (the Tories in 2009, Republicans in 2010) rose to power and it fizzled out.

So it's not an especially new idea — it's even been a part of the Green Party's official platform since 2012. But only recently has interest in the Green New Deal really taken off, spearheaded by Congresswoman Alexandria Ocasio-Cortez and the Sunrise Movement, a group that has held multiple sit-ins in Nancy Pelosi's office to demand the Democrats drop the empty rhetoric on environmental issues and actually do something.

So What Does It Actually Mean?

At this stage, it's still vague. But there are some generally accepted principles:

There's a lot of leeway within those core points, and moving beyond high-level idealism into policy specifics is one of the big challenges to come — especially as different political power sources try to take the idea and brand it as their own

So Break Down Those Big Challenges For Me...

The IPCC says that reigning in climate change will require "rapid and far-reaching transitions" that are "unprecedented in scale" in all aspects of society. If there was ever a time for proposing radical and ambitious public policy, now is it. Regardless of the obstacles to come for the Green New Deal, it seems to represent a galvanizing force and a rallying cry, and an inspiration that some people in office plan to do more than hem and haw while collecting a fat industry paycheck.

For more, check out this comprehensive guide.

This week, PG&E announced that it would file for bankruptcy in the face of a $30 billion liability for the wildfires in Northern California in 2017 and 2018. Experts are worried that this will slow California's goal of switching to 100% renewable energy by 2045.

Utility companies like PG&E play a big role in bolstering the renewable energy sector by investing in solar and wind projects, large-scale batteries, and other storage technologies across the state (much of this by government mandate). Renewable energy projects need stable clients like utility companies to buy their electricity under long-term contracts, and PG&E likely won't be able to continue with these contracts once it files for Chapter 11 bankruptcy. Some solar projects have already seen a dip in their credit rating this week.

How Will It All Turn Out?

It's a sticky situation. Critics are calling on state leaders to break up PG&E, while renewable energy developers want to stabilize PG&E quickly. California is a national leader in clean energy and all eyes are on the state to see how they deal with the market's financial instability.

Is sunscreen the new margarine?

How Hoboken redesigned for climate change after Hurricane Sandy.

The Earth's magnetic field is acting up.