The students have rallied around the #FridaysForFuture movement started by Swedish teen Greta Thunberg, who began skipping school to strike solo outside of Swedish Parliament in August 2018. She has since been nominated for the Nobel Peace Prize, and her mission has spread, as kids in thousands of cities now protest outside their city halls every Friday. The US focused Youth Climate Strike, which took place in over 100 cities this past Friday, was organized by just three teens...

What Do They Want Exactly?

It varies. The Youth Climate Strike, for example, wants a National Emergency declared on climate change, clean water, preservation of public lands, and halting existing fossil fuel projects. But they're all united under a common thread — being part of the first generation completely aware that the world they're inheriting is threatened, and that they will live to see the consequences of climate change.

According to Greta and other leaders of the movement: "We’ve relied on adults to make the right decisions to ensure that there is a future for the next generation – surely we don’t have all the answers. But what we do know is that we need to keep fossil fuels in the ground, phase out subsidies for dirty energy production, seriously invest in renewables and start asking difficult questions about how we structure our economies and who is set to win and who is set to lose."

The organizational talent, courage, and eloquence of today's youth is inspiring, especially in contrast to the indifference of world leaders who have disregarded the threat of climate change for decades. The kids have the support of scientists as well — 12,000 scientists signed a statement supporting the strikes. One of those scientists, Kate Marvel, says: "I’m a little irritated that students are the ones that feel like they have to do this. These are people who can’t vote yet. We can’t leave this to kids to solve."

Check out photos from strikes around the world here.

Dying is expensive (the funeral industry makes about $20 billion annually). And the way most people do it in the United States, not very good for the environment. You basically have two options for what happens to your body:

After being pumped full of embalming fluids, the body is placed in a wood casket lined with steel and stuffed into a concrete vault. It'll cost you an arm and a leg (couldn't resist) — between $7,000 and $10,000. Environmentally, it's an absurdist nightmare — each year we bury 800,000 gallons of embalming fluid, 30 million board feet of casket wood, 90,000 tons of steel, and 1.6 million tons of concrete.

Involves cooking the body in an extremely hot oven, grinding up the bones, and putting the gravelly blend into an urn. It's not quite as expensive, but not exactly cheap either — between $2,000 and $4,000. In addition to requiring a huge amount of energy, cremation releases a diverse blend of fossil fuels and toxic chemicals into the atmosphere (dioxin, hydrochloric acid, sulfur dioxide, CO2, and more).

Are There Any Other Options?

There's a rising demand for "green burials". Funeral home and cemetary membership in the non-profit Green Burial Council is growing (they might offer biodegradable wicker or cardboard caskets, for example). The options here are still very limited — but that could be changing.

The state of Washington is on their way to legalizing human composting (called "recomposition") — the bill has passed in both the House and the Senate, and must be signed into law by Governor Jay Inslee. The bill would also allow alkaline hydrolysis (dissolving a body with water and lye). The idea originated with Seattle designer Katrina Spade, who had the idea after learning of farmers who compost their livestock. Turns out humans decompose just like other animals!

How Does It Work?

The body goes into a capsule contaning organic material like wood, alfalfa, and straw. Microbes do the rest of the work, as aerobic bacteria take care of decomposing the entire body in about a month. It's effectively the same process as natural decomposition of matter on the forest floor, but faster. The end product is a cubic yard of nutrient rich compost, and the sequestering of at least a metric ton of CO2.

Spade has since founded a company called Recompose (which already has a waiting list of 7000+), and plans to open the first human composting facility once the bill becomes law. She hopes that "with our last gesture we can give back to the earth and reconnect with the natural cycles." For more, check out this interview.

Think before you flush. Most of that cushy 2-ply toilet paper is made from virgin wood pulp from the boreal forest of Canada. The US uses far more TP than any other country, consuming over 20% of the world's supply — the average American flushes 384 trees down the toilet over their lifetime.

So What's The Problem?

In addition to storing a ton of carbon, the boreal forest is relied on by over 600 indigenous tribes and wildlife like bison, wolves, black and grizzly bears, and caribou. Fueling the global demand for soft tissue products (including paper towels and kleenex) has cleared more than 28 million acres of trees (an area the size of Ohio) in the past 20 years. And logging operations emit hundreds of millions tons of carbon into the air every year, further exacerbating climate change.

Reducing your impact here is simple. Paper products made from recycled material release about a third of the greenhouse gases that virgin products do, and don't come from logging a new forest. The NRDC put together a scorecard ranking which toilet paper brands contain the most recycled content. Exercise your purchasing power by showing companies that there's only room for sustainable paper products in the market. 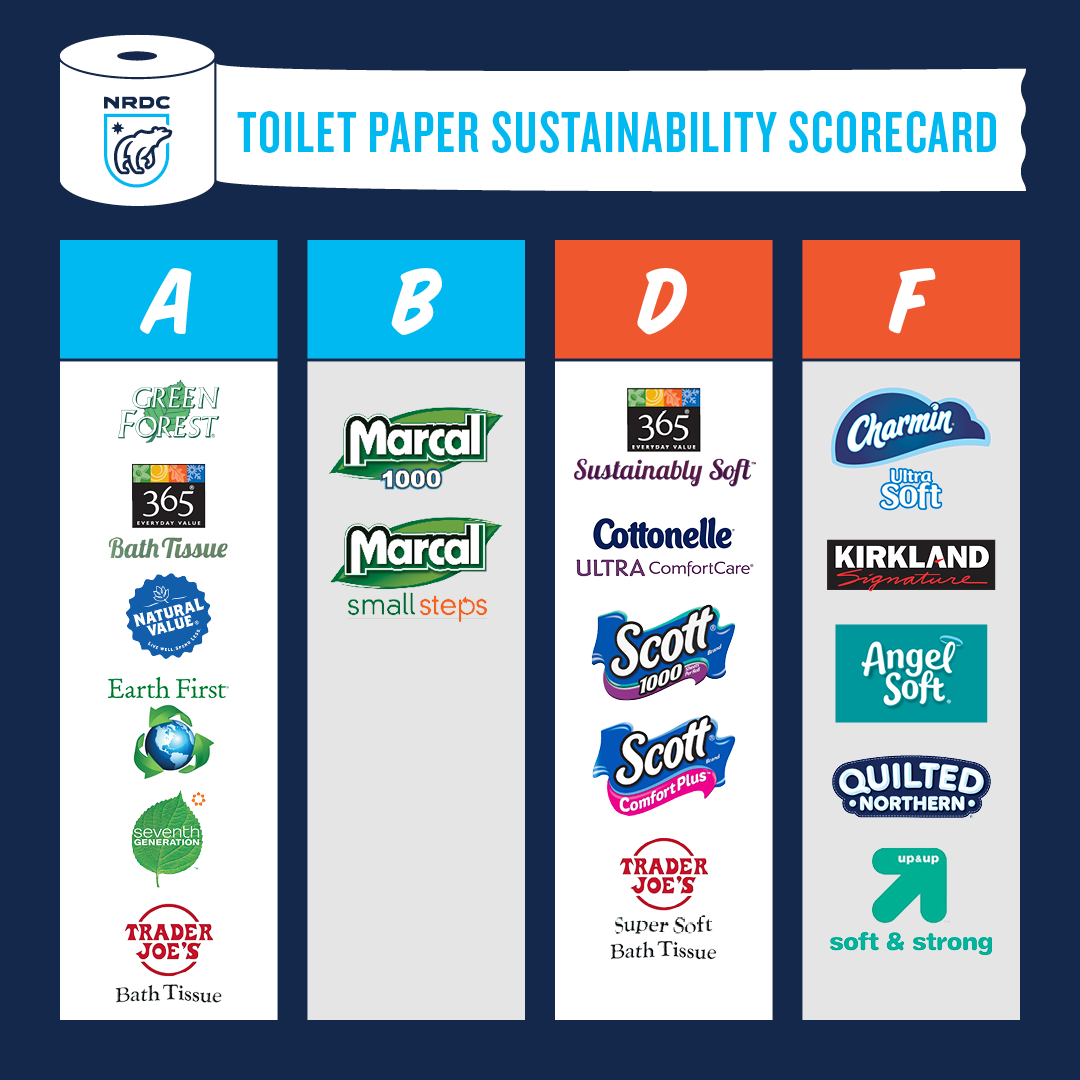 The scorecard only includes toilet paper, but we want you to question your assumptions about all the disposable paper products you use. For example, paper towels are an easy one to stop using completely. Check out this list of sustainable replacements.

Low-carbon heating to replace gas in new UK homes after 2025.

Chickens 'gang up' to kill intruder fox on French farm.

We can’t assume our water is safe to drink. But we can fix it.

Snoozing moose jams up the entrance to Silverthorne library.