While the White House continues bending over backwards to muzzle reports on climate breakdown (this week they unsuccessfully tried to stop State Department analyst Dr. Rod Schoonover from discussing it in a congressional testimony), the US military is doing its own thing. They've taken the security implications of a rapidly changing climate into account for over a decade, view it as a serious threat, and are preparing accordingly.

For a broader look, take a gander at the list below from Schoonover's report. There are many reasons for the military's concern. But there's also an interesting twist to all this climate-induced anxiety. 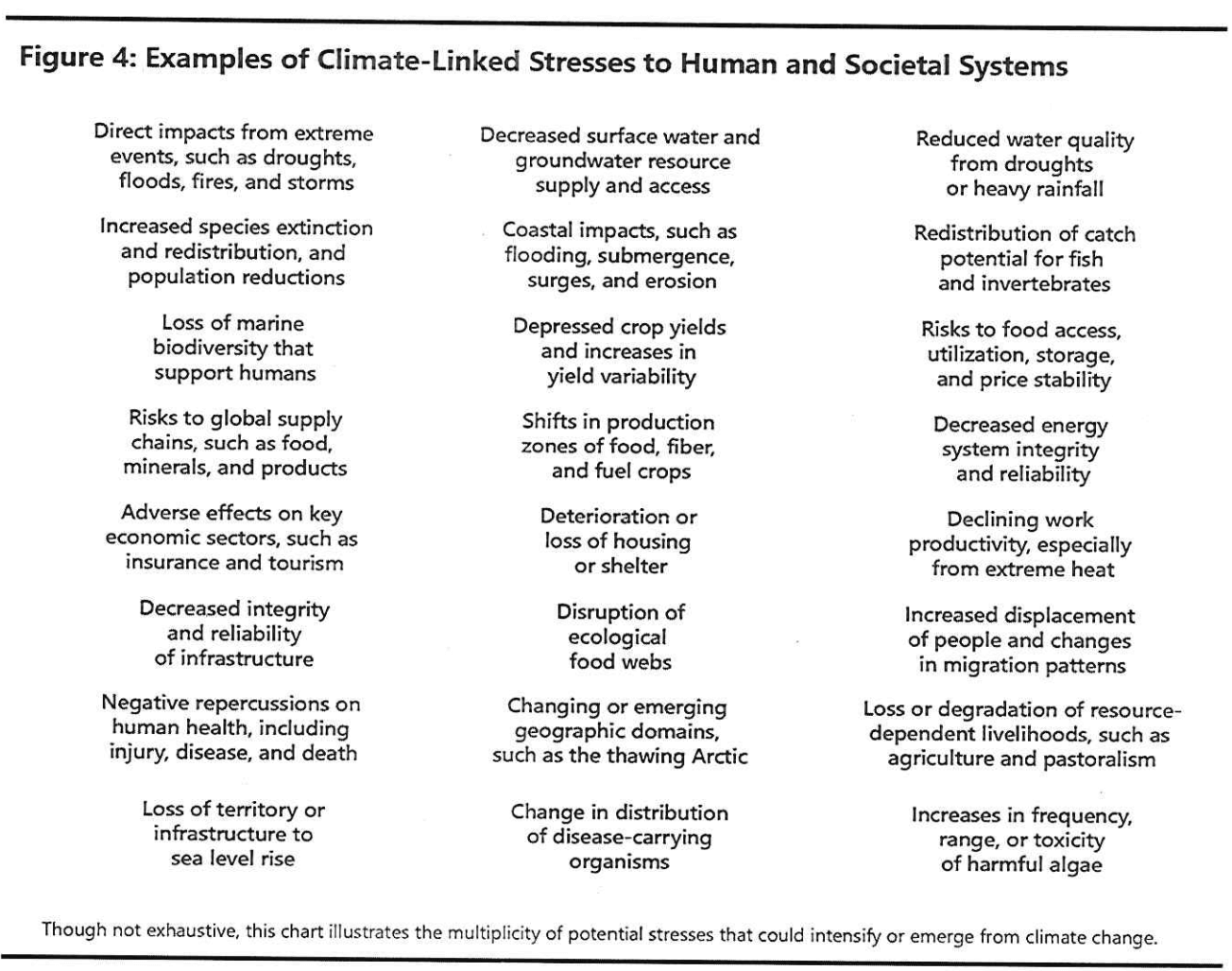 Source: Hearing on The National Security Implications of Climate Change

In a fascinating case of doublethink, the US Department of Defense (in the course of spending half the federal budget) uses more oil than any other institution in the world, generating more carbon emissions than the entire countries of Sweden and Denmark.

The military has stayed coy about their petroleum use for a long time, but a new study from Neta Crawford (published by Brown University’s Costs of War Project) drops some numbers on the Pentagon's emissions. Since 2001, the DOD has pumped out 1.2 billion metric tons of greenhouse gases — the biggest chunk coming from the War on Terror. 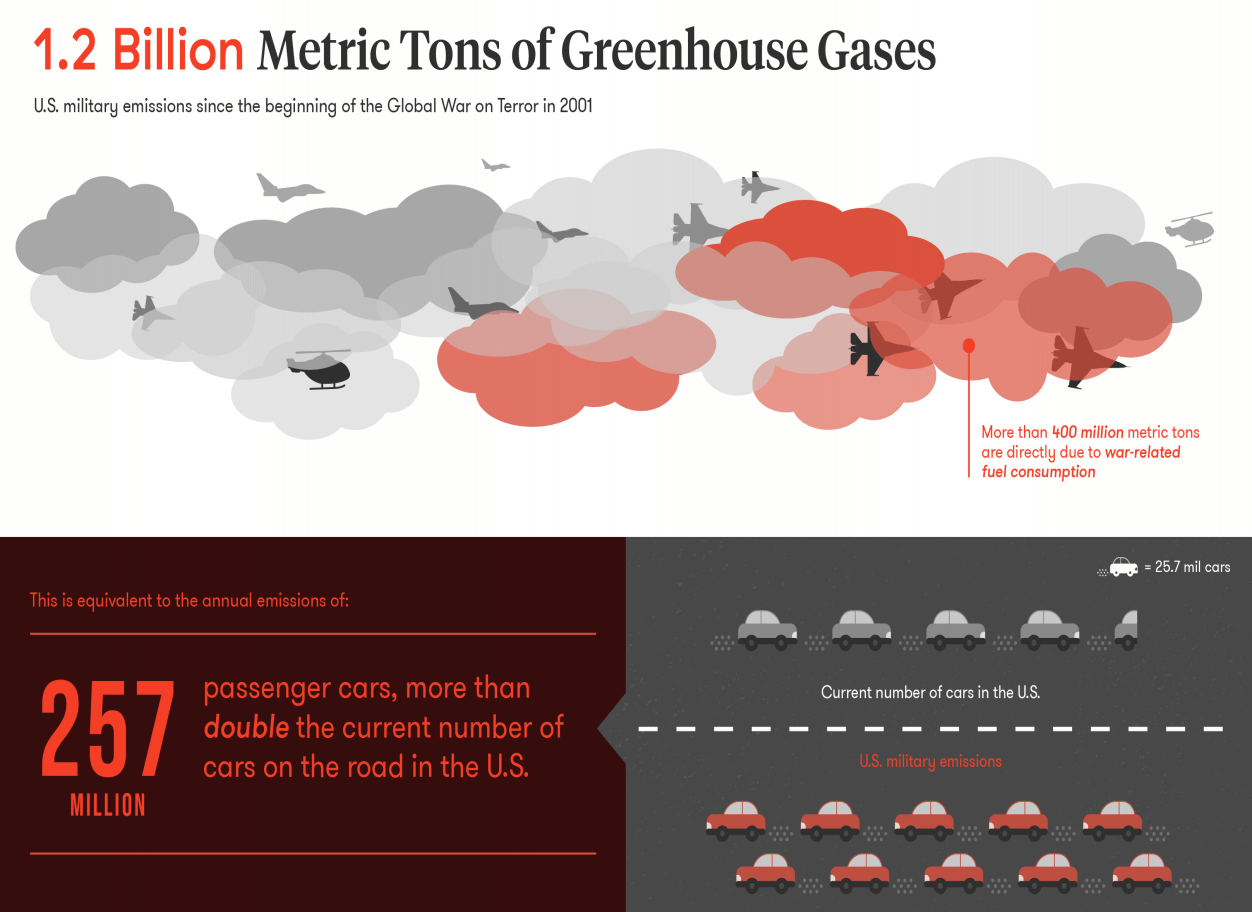 Why Do They Need So Much Fuel?

Humvees and stealth bombers aren't exactly the most fuel-efficient vehicles. Aircraft fuel use is commonly measured in gallons per mile. As Crawford says, "The war machine is thirsty..." 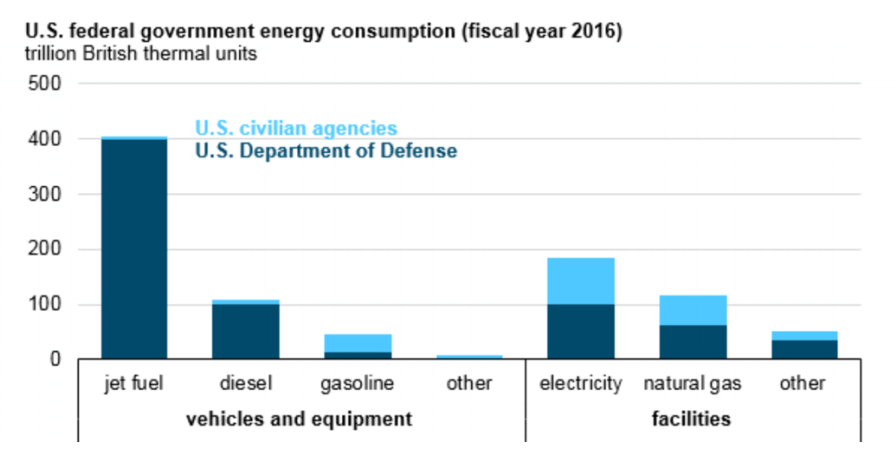 So They're Freaked Out By Climate Change But Burning Oil Like Crazy...

Yeah. Former Secretary of Defense Jim Mattis has called oil dependence the military's Achille's heel, and said the US needs to "be unleashed from the tether of fuel." Crawford makes a convincing case that this is both viable and necessary.

She says, “There’s an irony and tension between being so concerned about the risks of climate change for operations and installations and conflicts, yet being one of the world’s largest emitter of greenhouse gases. It’s as if two and two don’t make four here. If one sees a problem in the future, one would try to prevent it. But instead of trying to prevent it, the U.S. acts as if climate change conflicts are inevitable. Nothing about the worst outcomes is inevitable, we can still prevent them.”

Makes Sense To Me.

In addition, the report doesn't include other forms of pollution or the destruction inherent in war. Like how military action in Iraq has turned the country to desert and destroyed its agricultural industry (while chemical burn pits there poisoned soldiers), how the Navy has dumped hundreds of thousands of known dangerous environmental "stressors" in the Pacific Northwest ocean, and how 3/4 of all Superfund sites (where environmental emergencies get federal grants for cleanup) are abandoned military sites.

But hey, at least they're trying to plant trees with bullets!

Awhile back Washington Governor Jay Inslee called on the Democratic National Committee to hold a debate exclusively focused on climate change. The DNC responded with an emphatic NO, and declared that any candidate who participates in a non-DNC sponsored debate will be banned from the official debates.

DNC Chair Tom Perez claims that a single-issue debate about something like climate is "impractical."

In response Inlsee (who's running on a climate platform and has put together an extremely impressive plan to deal with it) said, "What’s impractical is trying to plant your crops under 8 feet of water in Iowa or trying to rebuild your home after it’s burned to the ground in Paradise, California."

Naomi Klein puts it well: "Climate is not an 'issue' - it's the backdrop for all other issues. It's the fabric of life on Earth and it is unravelling."

What Does Everyone Else Think?

The DNC's refusal has received an onslaught of backlash from environmental groups and activists and many of the Democratic Presidential candidates themselves. Fifteen candidates support an entire debate devoted to climate change, including front-runners Biden, Sanders, and Warren.

Petitions demanding a climate debate have racked up tens of thousands of signatures. However, some argue that a climate policy debate would be too dense, would bore voters, and wouldn't make good TV (because that's what it's all about, right?).

Did They Talk About It In The Last Election?

In 2016, only five minutes were spent talking about climate change in the three presidential debates.

350.org founder Bill McKibben said "The longer I think about [the] DNC insisting no-one hold a climate debate, the sillier it seems. We've literally never talked about this issue in a presidential debate, and we literally have to deal with it immediately. I don't understand why we shouldn't devote a night to it."

There's still time for the DNC to change course — the initial primary debates take place June 26 and 27 (featuring 20 candidates...). Although it's a top issue for voters, many remain uninformed on the nuts and bolts of climate policy. A debate focused on the single largest existential threat could help voters decipher which presidential candidates actually have a plan for addressing it.

This election is absolutely critical — time is running out to prevent the most horrific effects of climate breakdown. We cannot afford four more years of dawdling, and we need to make sure whoever makes it to the White House understands this.

Sign this petition urging the DNC to hold a debate on climate. A little public shaming on Twitter couldn't hurt either (#ClimateDebate). Make Tom Perez feel some peer pressure!

New York is building a wall — to hold back the ocean.

In “Hadestown,” the coal-fired lights are bright on Broadway.

Wild bees are building their homes from plastic — and scientists aren’t sure why.

The human toll of fracking.

How dengue, a deadly mosquito-borne disease, could spread in a warming world.

Breathe easier: States are passing a buttload of clean-energy bills.

Many animals use infrasound to communicate over vast distances.

Giant message to Trump etched into Nebraska cornfield: “No 45” + “No KXL”.

Tons of dead seals are washing up in the Arctic and nobody knows why.

Alberta warned it could take 2,800 years to clean up oilpatch.

US annually uses 388 million pounds of potentially fatal pesticides banned in the EU, China and Brazil.

What HAS Leonardo DiCaprio done for climate change?