The Water's Getting Warm

The Water's Getting Warm

It's easy to think of climate change as abstract and far off in the future, and ignore it as a result. Not anymore. The UN’s Intergovernmental Panel on Climate Change (IPCC) released a highly unsettling report this week, with the message that we need to act, immediately. The report describes how we now understand that the difference between a rise of 1.5°C and 2°C is tremendous (think Hunger Games vs Mad Max), and that we could reach 1.5°C in as little as 12 years.

We've discussed the Paris Agreements in previous weeks — to remind you, this is the global pact aimed at keeping global warming lower than 2°C . We're currently on pace for 3.4°C. In order to keep it from rising beyond 1.5°C, we will need to radically transform the world economy — cutting emissions by 45% by 2030 and 100% by 2050. This will require "rapid and far-reaching transitions" in "all aspects of society."

The panel says that "several hundred million" lives are at stake here. As temperatures continue to rise, we will see increasing shortages of food, a surge in droughts and wildfires, and the loss of coastal cities. A mass die-off of coral reefs could occur by 2040. The threat of climate change is an existential one, and radical change is a necessity.

Check out this amazing interactive feature from Carbon Brief to better understand the differences between a rise of 1.5°C and 2°C.

At its core, climate change is a political issue. This does not let individuals off the hook, and we should all take responsibility for our own actions by trying leave as small of a footprint as possible (read about what you can do here).

But we need a systems level shift. 100 companies cause 70% of the world's carbon emissions, and they aren't going to stop just because we ask nicely. The panel's scientists suggest implementing a hefty carbon tax, subsidizing clean energy instead of fossil fuels, and phasing out coal.

Politicians need to take this seriously. Hopefully this report gives them the impetus to do so. But we are collectively responsible for who gets elected, so choose wisely in the upcoming elections.

Over the past decade, honeybee populations have been mysteriously declining. The phenomenon has a name — "colony collapse disorder" — but scientists still aren't 100% sure of the root cause. Although there are likely several contributing factors, including habitat loss and pesticide use, some experts think that viruses are doing the real damage. The good news — a study published this week revealed that researchers have discovered a "vaccine" for bees.

The source? Mushrooms! Paul Stamets is a mycologist with a history of inventive and effective uses for fungi. Stamets first had the idea for using mushrooms to treat bees when he saw bees feeding off water droplets on the mushrooms that were growing on wood chips in his garden. Stamets says the fungal extracts "aren’t really antiviral drugs. We think they are supporting the immune system to allow natural immunity to be strong enough to reduce the viruses." Either way, the study results are jaw-dropping and highly encouraging for the future of the bees.

The implications of honeybees dying off are serious, as nearly one third of crops depend on bees and other pollinators for survival (blueberries, avocados, onions, almonds, and many others). According to Stamets, "A loss of bees is like rivets in an airplane. If we lose the bees, it is a critical rivet in an airplane that can lead to catastrophic failure."

According to the International Renewable Energy Agency (IRENA), renewable energy sources will likely become cheaper than fossil fuels within the next two years. The price of solar energy has dropped 73 percent since 2010, while onshore wind power has dropped 23 percent since then, and the numbers are expected to continue to fall. Solar and wind have been the hot topics of late, but hydropower, bioenergy, and geothermal energy will all play a role in making a complete shift from fossil fuels to green energy an economic no-brainer. 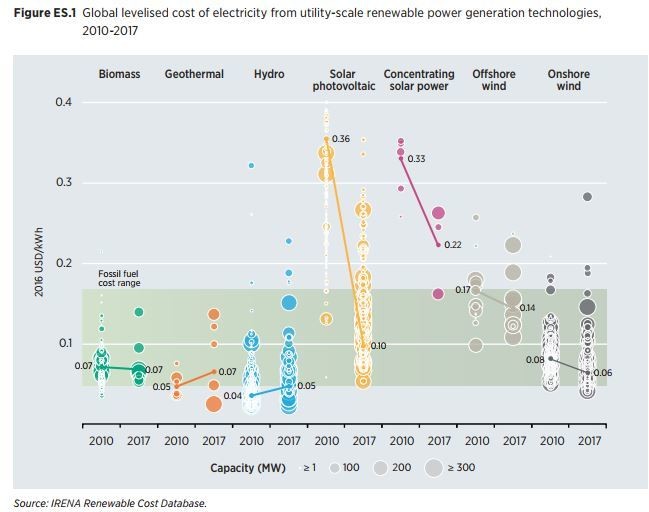 More than $1 trillion has been invested in renewable energy around the world and the industry now provides nearly 10 million jobs. The market is growing. If renewable energy can undercut the cost of legacy fuels, governments and large corporations will turn to green energy for new ventures, reducing the demand for oil, natural gas and coal.

Building cities out of wood as strong as steel.

Soft robotic jellyfish get pumped in the Atlantic.

Wind-powered ships are making a comeback.

Will smart machines be kind to animals?

How the word ‘meat’ could shape the future of protein.