The UN released a report last week stating that rising temperatures in the arctic are unavoidable and "locked in" even if countries collectively cut emissions to meet the Paris Agreement goals. The report predicts that winter temperatures over the Arctic ocean will be 3-5C warmer by mid-century, and that the region will be completely ice free during the summer by 2030. In the last 30 years, arctic sea ice has declined by 40% — which constitutes a third of global sea level rise. 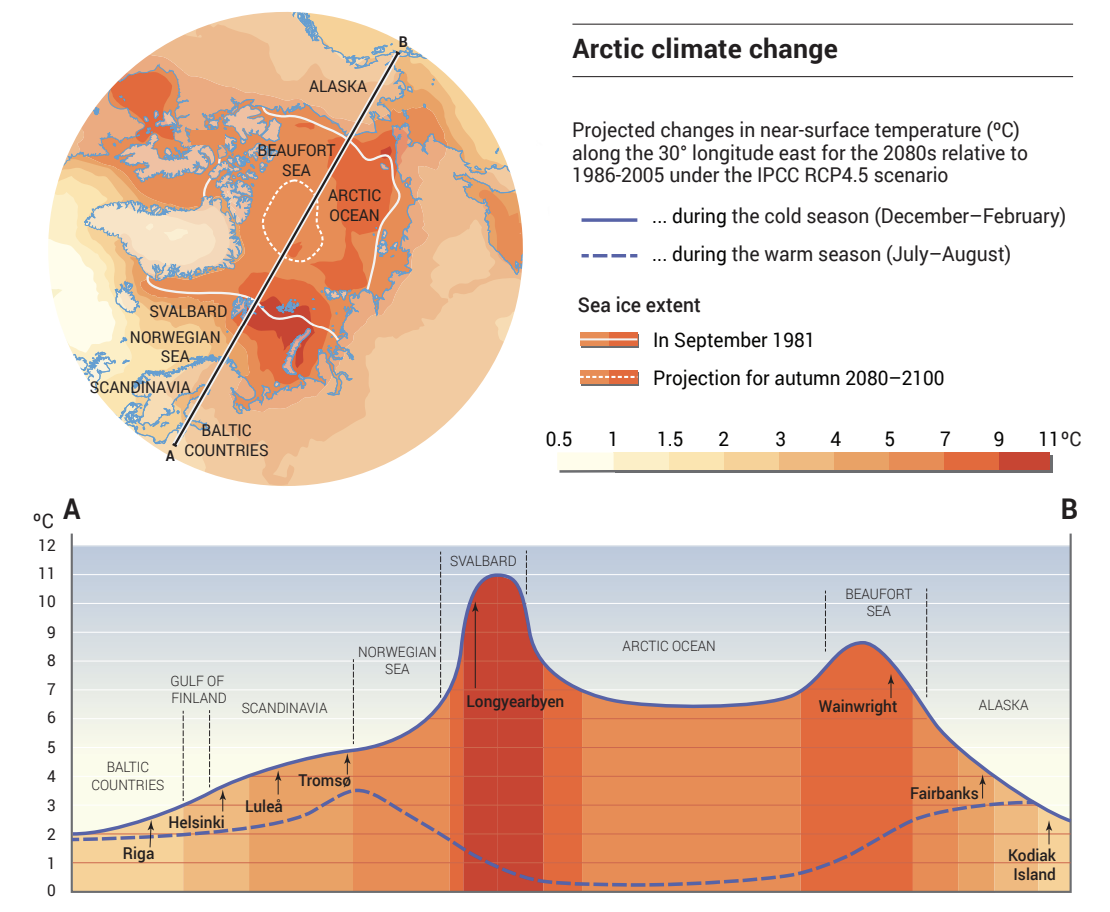 Why Is It Unavoidable?

The permafrost. Permafrost is permanently frozen soil, which in some regions has been frozen for thousands of years. It sequesters over 1.5 trillion tons of carbon — double the amount currently in the atmosphere. When permafrost thaws, it releases carbon into the atmosphere in the form of methane, which causes a positive feedback loop. The increased levels of greenhouse gases warm the atmosphere, which in turn melts more permafrost, which releases more carbon, and so on. Scientists expect the total amount of permafrost to eventually shrink by 45%, and new models indicate that it's thawing way faster than previously thought.

In addition to accelerating warming, the melting permafrost will disrupt ecosystems and wreak havoc on the infrastructure of the cities and villages built on top of it. It could also release "zombie pathogens" that have been frozen in the soil, as well as other dangerous chemicals (Mercury is the main concern). 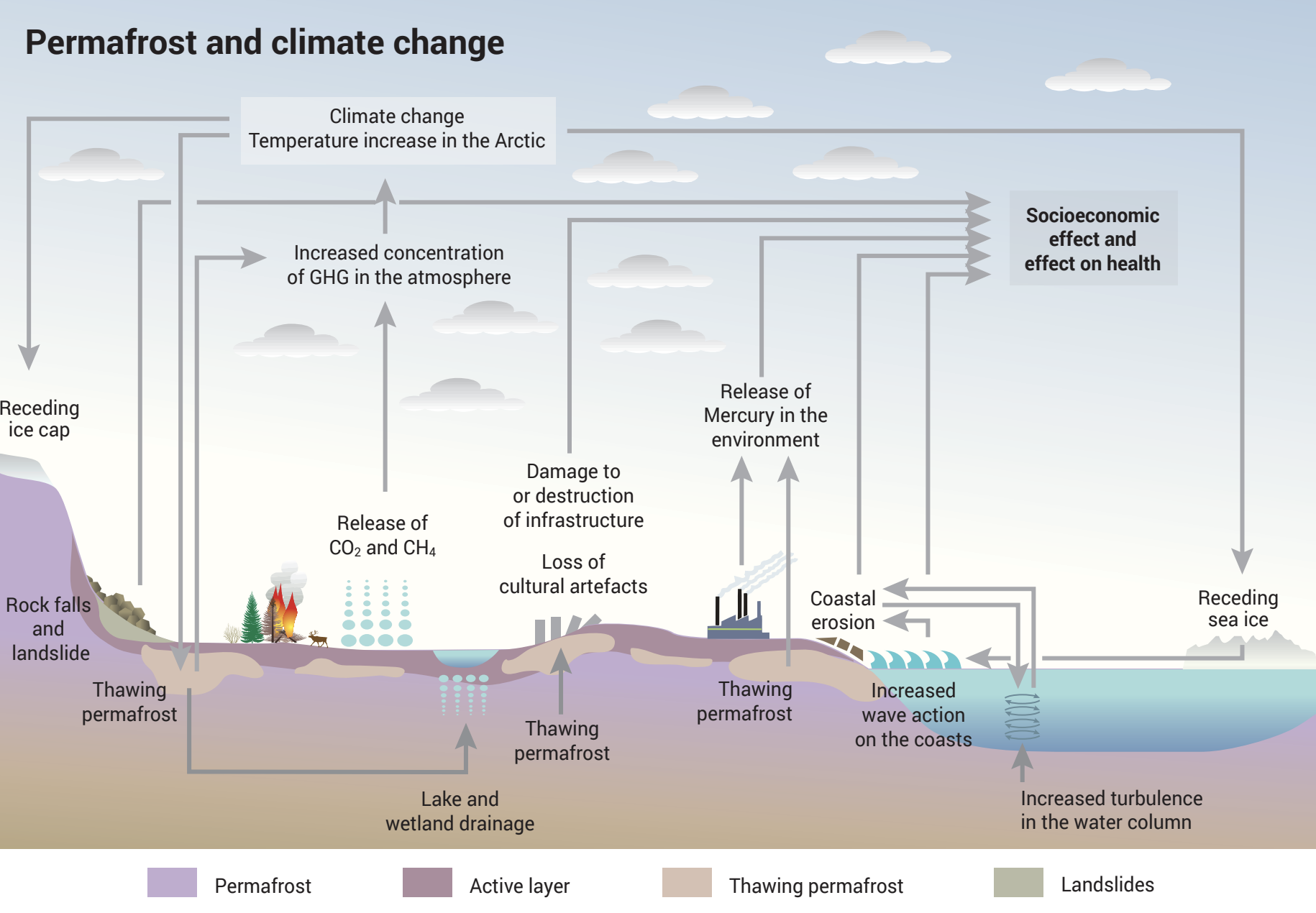 What Else Did The Report Say?

Marine life in the Arctic is feeling the effects of the ocean's increasing acidification. The world's oceans have become 30% more acidic since the industrial revolution, which makes it harder for animals like mollusks, plankton, and coral to build their shells and skeletons. It's worse in the Arctic because cold water can hold more CO2, and fresh water from melting sea ice knocks down the pH even more.

The region also happens to be a sink for chemical pollutants, and the report's authors call for stricter controls on possible contaminants.

Who's Building The Arc?

Cyclone Idai blasted through southeastern Africa last week, devastating much of Mozambique, Malawi, and Zimbabwe. The storm destroyed 90% of Beira on the coast of Mozambique, a city of half a million people, and the UN is calling it one of the worst disasters to ever hit the southern hemisphere. The death toll is still increasing and expected to rise to well over 1000. Nearly 3 million people are affected, with many still stranded atop buildings without food or clean water.

Is This Related To Climate Change?

The frequency of tropical storms isn't necessarily increasing due to the changing climate, but the intensity of those storms is getting worse. The warmer atmosphere leads to more extreme rainfall, and rising sea levels make the storm surge and inland flooding caused by cyclones more severe.

The Innocent Bear The Cost

Countries that did little to cause climate change will have to endure its most devastating effects. As natural disasters continue to strike with increasing brutality, the greatest risk falls on developing countries with long coastlines (like Mozambique) and tropical island nations.

In 2009, at the United Nations Framework Convention on Climate Change, wealthy countries committed to raising $100 billion by 2020 to help developing nations adapt and cope with the effects of climate change. But partway through 2019, they've only coughed up 10% of that total. The GCF has a ton of innovative projects underway, but more money is badly needed — the city of Beira was in the midst of a project to shore up its ability to handle flooding when Cyclone Idai hit.

A bomb cyclone (a storm that gets really intense, really fast) swept through the US Great Plains last week, causing blizzards, widespread flooding, and at least four deaths — over half the counties in Iowa and Nebraska declared a state of emergency. It's a huge blow to farmers, as the total cost of ruined crops, infrastructure damage, and drowned livestock likely surpasses $1.3 billion. Farmers have already seen their income drop by 60 percent in the last five years.

How You Can Help

Contribute to organizations helping victims of the bomb cyclone in the midwest:

How recycling is changing in all 50 states.

Forget Tesla, it's China's e-buses that are denting oil demand.

In the future, everything will be made of chickpeas.

Costa Rica aiming to be world’s first plastic and carbon-free country by 2021.

Why restaurant demand for smaller fish fillets is bad news for oceans.