At this point it's easy to fall into the trap of assuming that Earth's problems primarily derive from carbon emissions, with some plastic thrown in there. A UN report released last week (which includes nearly 150 authors from 50 countries, and analyzes 15,000 studies), breaks down the many other ways humans are wreaking havoc on the planet. The authors emphasize our reliance on nature and stress that our fates our intertwined — and that unless we get our act together quickly, things will get very bad indeed.

Before your eyes glaze over — this is important stuff, and now is not the time to become desensitized.

Ok, So What Are The Major Findings?

The current decline of the natural world and biodiversity loss "is unprecedented in human history" — over a million species face extinction within decades, and more than a quarter of all species on Earth are threatened. We're rapidly losing local varieties of plants and animals, and this seriously threatens global food security — genetic homogeneity means less resilience to pests, diseases, and climate change.

"There are two big indirect drivers of biodiversity loss and climate change — the number of people in the world and their growing ability to consume," said Robert Watson, chair of IPBES (the organization behind the report).

The biggest direct cause is land and sea use (which primarily means agriculture). We're producing more food than ever before, and fewer people live in poverty, but this comes "at the expense of nature’s ability to provide such contributions in the future." Urban areas have doubled since 1992, plastic pollution has increased tenfold since 1980, and fertilizer use has doubled since 1990. We've altered 75% of all land and 66% of the oceans, consistently overfishing and turning huge swaths of the earth into an agricultural machine. But this can't continue indefinitely. 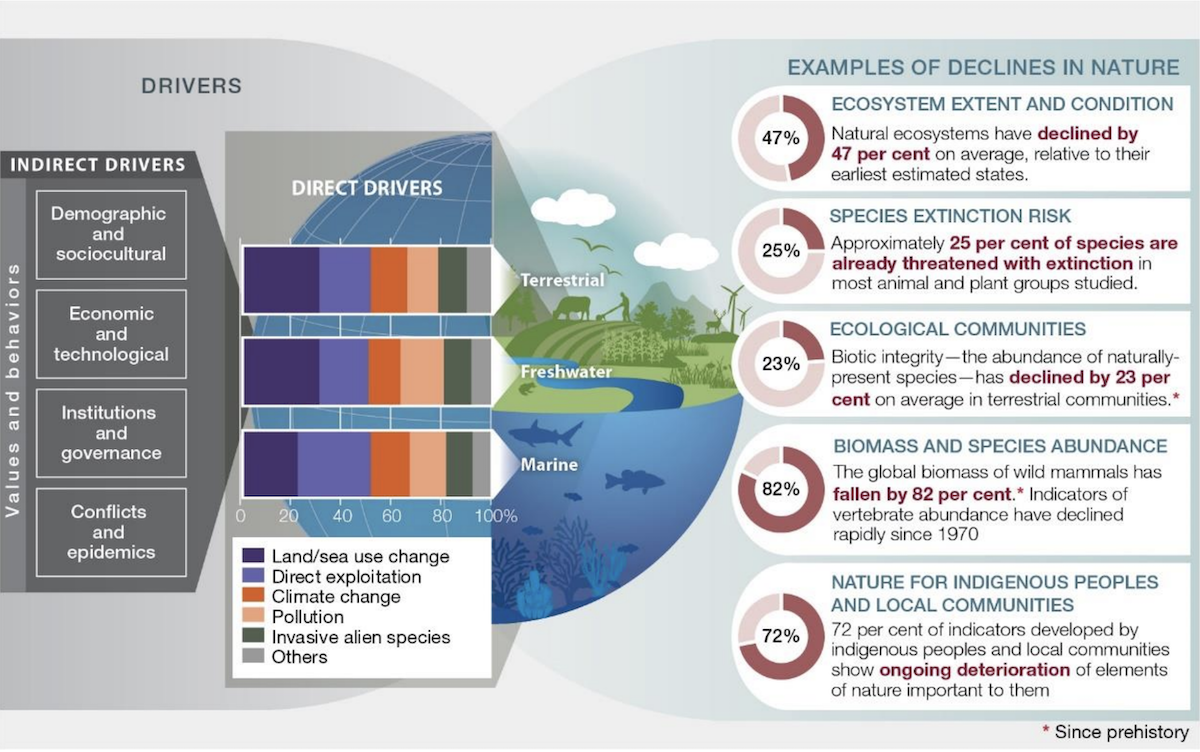 What Needs To Change?

First, we need to rethink our dominant economic models. Not only does this mean moving away from the worship of a permanently growing GDP, but also accounting for the "externalities of economic activities".

Basically, nature provides countless free services to us. One example is pollination — the report states that $577 billion in annual US crop is currently at risk due to a reduction in pollinating insects. But an oil or agribusiness corporation that destroys the habitats of these pollinators doesn't have to shoulder the economic burden associated with it. In fact, the IMF recently released a report showing that when you take externalities into account, the global fossil fuel industry is being subsidized to the tune of $5.2 trillion per year. Eliminating these subsidies seems like a logical place to start.

Fair Enough — What Else?

Much like the IPCC climate change report, the authors say that "fundamental, structural change is called for." Among other things, we should drastically increase protected areas on land and the ocean (a newly planted monoculture of trees is radically different from an old growth forest), enact policies that require sustainable agriculture, and tailor solutions to the local level (while getting policy input from indigenous people and the community). And as a society, we need to figure out how to re-program our values — how to move away from material consumption and take responsibility for its impacts.

A common trope these days is that your individual choices don't really matter — the only actions that will really have an impact on ecological breakdown at this point are political and systemic. This sentiment is literally true, but fails to acknowledge that individual beliefs and actions add weight to a collective framework that can translate to political pressure and societal transformation (look at Extinction Rebellion).

Regardless of what you might think about the necessity of protecting the environment, the general rule of thumb is that the wealthier you are, the larger your carbon footprint. So instead of stressing about exchanging one brand for another, make an effort to analyze your deeper assumptions.

A case study — today's typical young progressive-minded person seems to view travel as, if not an inalienable right, a fundamental good. Ask someone and you'll get rhetoric about broadening perspectives, understanding other cultures and even yourself better. That's all valid, but consider one of the downsides. The report highlights the fact that tourism has grown dramatically in the past twenty years — in addition to causing a rise in invasive species, currently almost 10% of all carbon emissions result from tourism-related transportation and food consumption. That's more or less equal to the global emissions produced from agriculture. And you hear a lot about figuring out sustainable alternatives for producing meat, but very little about alternatives to 20-somethings Instagramming their hotel in Bali.

The takeaway — examine the ecological implications of your actions, and take responsibility for them. Claiming ignorance is not an excuse.

Some countries are taking notable steps to fight climate change, while others seem intent on digging our collective grave. Let's dole out some shame and give credit where it's due.

While the world's scientists lamented our current state of ecological breakdown, US Secretary of State Mike Pompeo breathlessly explained all the ways the melting Arctic is a fantastic thing. At a meeting of the Arctic Council (an organization of eight countries and indigenous tribes, with the goal of protecting the Arctic ecosystem) in Finland, Pompeo said, "The Arctic is at the forefront of opportunity and abundance. It houses thirteen per cent of the world’s undiscovered oil, thirty per cent of its undiscovered gas, an abundance of uranium, rare-earth minerals, gold, diamonds, and millions of square miles of untapped resources, fisheries galore." Because clearly the solution to our problems is finding new places to dig up oil.

On a related note, the US has the highest rate of anthropogenic climate change denial in the western world — 13% of Americans think that humans play no role in the changing climate. Saudi Arabia and Indonesia were the only countries with a higher percentage.

President Bolsonaro has systematically tried to undo conservation measures in the Amazon Rainforest — one of the most biodiverse ecosystems on the planet. Most recently he declared his intention to open a reserve (larger than the size of Denmark) in the Amazon up to mining, and strip environmental protections from a coastal forest near Rio de Janeiro in hopes of building the "Cancún of Brazil."

See their foot-dragging on the EU climate budget proposal below.

These EU countries signed a joint statement proposing that 25% of the EU budget go specifically towards "projects aimed at fighting against climate change." They also pushed for a commitment to get to net zero emissions by 2050 at the latest. All 28 countries in the EU must approve the plan for it to take effect, but some countries are dragging their feet — including Germany, ordinarily a world leader on climate.

Great Britain just went a full week without burning any coal for the first time in 137 years. The UK has cut emissions from generating electricity by 50% since 2013, largely due to reducing their coal use — they've committed to going entirely coal-free by 2025. The British are also planting a seven mile long "bee corridor" of wildflower meadows through London parks to expand the habitat for pollinators.

Both Ireland and Scotland declared climate emergencies — similar to the one passed in the UK, the declaration is largely symbolic, but acknowledgement is the first step! The Scottish government has already pledged to go carbon neutral by 2045.

These guys are hard to pin down... Germany is currently testing a new system of cables that supply electric power to trucks as they drive on the autobahn, in an attempt to combine the best features of electric rail and trucking. The trucks could run completely off the provided electricity when the overhead lines are available, and use a hybrid system as a fallback. This could make a big dent on emissions, as the long-distance trucking industry is the fastest growing source of oil demand.

Can palm oil be replaced with extracts from coffee grounds?

How hedgehogs became the latest victim of the obesity crisis.

Permafrost is thawing in the Arctic so fast scientists lost their equipment.

This bird went extinct and then evolved into existence again.

Start-ups hoping to fight climate change struggle as other tech firms cash in.

We’ll soon know the exact air pollution from every power plant in the world.

A small town, a chemical plant and the residents' desperate fight for clear air.