The Most Sustainable Food

The Most Sustainable Food

Kelp is having a moment. While harvesting wild seaweed is nothing new to cultures like the Welsh, Scottish, Irish and Japanese, it's a relatively new phenomenon in the US. Kelp farms are popping up along both coasts and well-known chefs across the country are putting kelp on the menu.

Kelp is an incredibly sustainable food source, giving back to the ocean while taking little away. Kelp farming requires zero inputs — no freshwater, no land, no fertilizers, no pesticides. It grows on a rope and can expand 4-6 inches a day. It sucks up excess CO2, phosphorous, and nitrogen, and releases oxygen in a process called phytoremediation, which improves the surrounding water quality and reduces its acidity (ocean acidification is one of the major issues associated with climate change). UC Santa Cruz ecologist Chris Wilmers says the effect of kelp forests "is on par with a tropical rainforest in terms of the amount of carbon they turn over in a year." 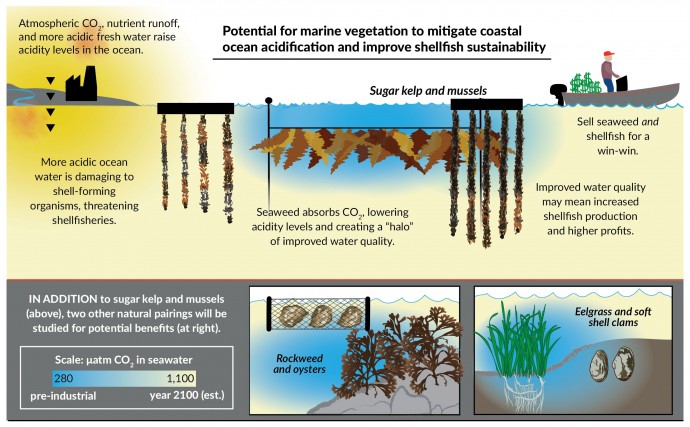 Is It Good For You?

Oh yeah — seaweed is a nutritional powerhouse, with an abundance of iodine, iron, calcium, potassium, and other vitamins. Kelp farming can also help struggling fisheries with needed income during their off seasons or when yields are low due to warming waters or overfishing.

While dried seafood products (usually imported) are readily available at most grocery stores, fresh kelp is a bit harder to find. Organizations like Green Wave and Island Institute are working with kelp farmers to create a market for fresh kelp in the US, with the goal of creating 50 million new jobs within the industry. Currently you can find fresh-frozen kelp online at Atlantic Sea Farms. You can use kelp like any other leafy green vegetable, and throw it into anything from pastas to soups to sauces.

Yep — the furry little guys are a keystone species for coastal ecosystems. They chow down on sea urchins and other small invertebrates that would otherwise completely ravage kelp forests and disrupt the entire food chain. A study quantified the effect of the presence of otters on the ability of kelp forests to store carbon — turns out they increase storage capacity by up to 8.7 megatons (equal to the annual emissions of 6 million cars)!

After 11 days of constant protests throughout London, Extinction Rebellion can check the first demand off their list — Tell the Truth ("Government must tell the truth by declaring a climate and ecological emergency, working with other institutions to communicate the urgency for change"). The UK became the first government in the world to declare a climate change emergency last week, with the entire House of Commons voting in favor.

What Does This Actually Mean?

The declaration is mostly symbolic at this point — it doesn't have any real legal weight or policy consequences. But it represents a clear acknowledgement of the issue at hand, and Extinction Rebellion plans to keep the pressure on to make sure it translates to concrete action.

A recent poll released by Greenpeace revealed that 63% of UK citizens believe our current state represents a climate emergency, and 76% would vote differently to protect the planet and climate. It appears that politicians are taking notice.

Meanwhile, Across The Atlantic...

Climate policy is shaping up to (finally) become one of the central issues discussed in the US Democratic Primaries — last week Beto O'Rourke released a $5 trillion plan to fight climate change, and Jay Inslee (who is running on climate platform) unveiled the first segment of a massive plan of his own. Beto's plan is surprising given his sub-par record on environmental policy and coziness with the fossil fuel industry, but it's an encouraging indicator that candidates understand that climate change is a major issue for voters — a recent CNN poll showed that an aggressive stance on climate change is the single most important policy position for Democrats. We plan to dig into the details of candidates' climate policies in future weeks, so stay tuned!

Rate It For Me.

David Wallace-Wells believes that you, dear reader living a comfortable life in an affluent country, have not adequately reckoned with the consequences posed by climate change. The Uninhabitable Earth is a wake up call — a chilling construction of the dystopian landscape we are hurtling towards. The data he presents is not necessarily new, but in avoiding the "eerily banal language of climatology" he removes the academic curtain and makes the implications of this data concrete.

Wallace-Wells sketches an undeniably bleak picture of what humanity is up against. But it is by no means a fatalistic account. He emphasizes that a range of futures are still possible — but the window is closing, and the time to act is now.

"But while there are a few things science does not know about how the climate system will respond to all the carbon we've pumped into the air, the uncertainty of what will happen — that haunting uncertainty — emerges not from scientific ignorance but, overwhelmingly, from the open question of how we respond."

Why Should I Read It?

Fear is a powerful motivator. If you're like many, maybe you don't feel a personal responsibility to make big life changes due to climate change yet (and going to that protest sure is inconvenient). It still feels somewhat abstract and far away — and if it's that important someone in power must be doing something about it, right?

The Uninhabitable Earth will shake off that complacency, fast. It gives shape to the urgency shown by the Greta Thunbergs of the world, the Youth Climate Protests and Extinction Rebellion. It will force you to look at the challenges facing humanity with clear eyes — just don't read it on a night you need to sleep well.

What's So Great About It?

It challenges a lot of assumptions we tend to have about climate change — what caused it and where we're heading. Some examples:

If Cormac McCarthy wrote non-fiction about climate change. Wallace-Wells makes it abundantly clear that the future is grim, but it's hard not to take pleasure in the rhythm of his carefully crafted sentences.

Give Me A Quote That Conveys The Vibe.

"In the affluent cities of the West, even those conscious of environmental change have spent the last few decades walking our street grids and driving our highways, navigating out superabundant supermarkets and all-everywhere internet and believing that we had built our way out of nature. We have not. A paradise dreamscape erected in a barren desert, L.A. has always been an impossible city... For a time, we had come to believe that civilization moved in the other direction — making the impossible first possible and then stable and routine. With climate change, we are moving instead toward nature, and chaos, into a realm unbounded by the anthology of any human experience."

India hit by its biggest cyclone in 20 years.

What if air conditioners could help save the planet instead of destroying it?

Renewables generated more electricity than coal for the first time in US history.

These giant robots are death machines for weeds.

The circular economy could create an enormous jobs boom.

Beyond Meat is going public. Meat alternatives are going mainstream.